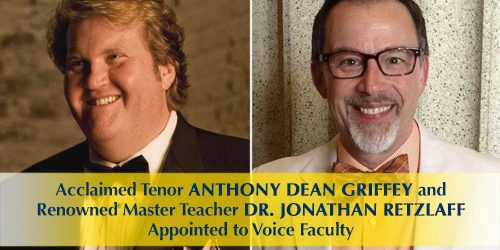 ROCHESTER, N.Y.—Grammy-winning tenor Anthony Dean Griffey, whose signature roles include Peter Grimes, and lyric baritone Jonathan Retzlaff, associate professor of voice at the Blair School of Music at Vanderbilt University, have been appointed to the faculty of the Eastman School of Music of the University of Rochester.

Griffey, whose upcoming engagements include the U.S. premiere of The Road of Promise with The Collegiate Chorale at Carnegie Hall, appearances with the Atlanta Symphony and The Philadelphia Orchestra as well as returning to the Sao Paolo Symphony for performances of Gurrelieder, and bringing his celebrated interpretation of Of Mice and Men to Canada for the first time, will continue to perform while taking on teaching responsibilities as Professor of Voice. Griffey received a Performer’s Certificate and his Master of Music degree at Eastman.

“I’m very excited to be coming back to Eastman in this role,” said Griffey. “Eastman has always held a special place in my heart from the time I was accepted to study with John Malloy. It is a collegial and supportive place for students who come to work and learn, with tremendous camaraderie among the faculty. I love to teach, and to teach and continue to perform is to combine both of my loves.”

Griffey is acclaimed for his dramatic interpretation as well as his powerful lyric tenor voice, and has performed on opera, concert, and recital stages around the world. He debuted the title role in Britten’s Peter Grimes at the Tanglewood Festival in 1996 under conductor Seiji Ozawa and then went on to sing the role at The Met, Opera Bastille, Santa Fe, Glyndebourne, Houston Grand Opera, San Diego Opera, Canadian Opera Company, and the Aspen festival. The New York Times noted that in his most recent performance of the role at Carnegie Hall with the St. Louis Symphony under David Robertson, Griffey “again proved himself one of the most courageous actors in opera today.” His 2008 performance at the Met was broadcast in HD and has been released on DVD.

Griffey debuted the role of Mitch in André Previn’s A Streetcar Named Desire, joining Eastman School of Music alumna Renée Fleming in the 1998 world premiere at the San Francisco Opera. When he reprised the role with the Los Angeles Opera in 2014, The Hollywood Reporter stated his performance cemented “his stature as one of the finest singing character actors in American opera.”

Griffey has appeared in the world’s most prestigious opera houses including the Metropolitan Opera, San Francisco Opera, Lyric Opera of Chicago, Santa Fe Opera, Houston Grand Opera, Los Angeles Opera, Paris Opera, Tetrao Communcal di Firenze, and Teatro dell’Opera in Rome. His many roles also include the title roles in Idomeneo, Oedipus Rex, and Kurka’s The Good Soldier Schweik; Florestan in Fidelio, Alfred in Die Fledermaus, and Jim Mahoney in The Rise and Fall of the City of Mahagonny.

As a concert performer, Griffey made his Carnegie Hall’s Zankel Hall recital debut in 2004, where André Previn composed and dedicated a song cycle for him and accompanied him on the piano. New York Magazine wrote of the concert, “savor the moment and his career choices. This is a big vocal talent.” Griffey appears regularly with many distinguished international orchestras such as the New York Philharmonic, Boston Symphony, Berlin Philharmonic, London Symphony, Orchestre de Paris, Japan’s Saito Kinen Orchestra, and more. He has also appeared in the world’s most prominent festivals, including the BBC Proms and the Tanglewood, Ravinia, Edinburgh, and Lanaudière festivals, and under such acclaimed conductors as James Conlon, Sir Andrew Davis, Sir Colin Davis, James Levine, Lorin Maazel, Michael Tilson Thomas, and others.

Griffey’s extensive discography includes the Los Angeles Opera’s The Rise and Fall of the City of Mahagonny, which earned him two Grammy awards, and Mahler: Symphony No. 8; Adagio from Symphony No. 10, for which he also received two Grammys.  His other recordings include Of Mice and Men with the Houston Grand Opera, Britten’s War Requiem with Kurt Masur and the London Philharmonic Orchestra, and video and audio recordings of the San Francisco Opera’s A Streetcar Named Desire.

Active in many charitable efforts, Griffey serves on the boards of the Open Door Shelter for the homeless and the Mental Health Associates of the Triad in his hometown of High Point, N.C., raising money and giving benefit concerts for those causes. He is also on the advisory board for Glimmerglass Opera.

In addition to his degrees from the Eastman School of Music, Griffey holds degrees from Wingate University and the Juilliard School, where he received the Advanced Certificate, and was a member of the Metropolitan Opera’s Lindemann Young Artists Program.  He served on the faculty of the University of North Carolina at Chapel Hill for three years and for the last two years has been Distinguished Artist in Residence at the University of North Carolina School of the Arts.  Griffey was awarded the Doctorate of Humane Letters from Wingate University in May 2012.

“Anthony Dean Griffey’s illustrious career in opera, concert and recital has taken him to the most important concert halls around the world,” said Russell Miller, chair of the voice and opera department at Eastman.  “Mr. Griffey’s commitment to expressive communication of text and character as well as of beautiful sound is in the best tradition of Eastman. The palpable excitement of our students at the warmth of his singing and the effectiveness of his teaching shows how much our whole department will benefit from having this distinguished alumnus with us.”

Dr. Retzlaff, a lyric baritone, has championed the art of the song recital following his New York debut recital of French mélodie at Carnegie Recital Hall. He has performed on prestigious concert series including the National Gallery of Art, and Phillips Collection in Washington, D.C.; the A. I. Lack Music Master Series at the University of Houston, Texas; and the Bechstein Recital Series in Santa Fe, N.M. He has also performed on the Community Concert Series under the auspices of Columbia Artists Management, on National Public Radio, and at colleges and universities spanning the country. Dr. Retzlaff was a semi-finalist in both the Elly Ameling Lied Concours held in The Hague, The Netherlands, and the Walter W. Naumburg Vocal Competition in New York.

“I am honored and elated to join my colleagues on the voice faculty at Eastman in continuing its legacy of artistic excellence, pedagogical innovation, and scholarship,” said Retzlaff. “The gifted students and faculty with whom I interacted clearly indicated that Eastman is uniquely poised to shape future generations of young artists, superbly preparing and mentoring them to meet the demands of the ever-changing world of classical singing.”

His students have been winners of regional, national, and international voice competitions. Baritone Ben Edquist was winner of the 2014 Lotte Lenya International Voice Competition. Dr. Retzlaff’s students have been admitted to graduate programs at The Eastman School of Music, The Juilliard School, Indiana University at Bloomington, Cincinnati Conservatory of Music, New England Conservatory, Manhattan School of Music, and the University of Texas at Austin, among others.

“Jonathan Retzlaff brings to Eastman over 30 years of heralded teaching to the voice profession. He has a diverse and extensive range in vocal literature that will complement the department and offer the highest musical standards for the Eastman student,” said Professor of Opera and Chair of the Search Committee Steven Daigle. “Students have high praise for Jonathan’s mentorship and guidance. Many of them are having successful careers as performers and are now teaching in higher education. We look forward to having him be an intricate part of the voice and opera department.”

The Eastman School of Music ranks among the nation’s premier music schools, boasting Guggenheim Fellows and Grammy and ASCAP Award winners on its distinguished faculty. The school has been commended and recognized nationwide for giving its students an intensive professional education, entrepreneurial opportunities in their music disciplines, and the experience of a broader liberal arts education with the University of Rochester. Its prominent alumni include opera singers Renée Fleming and Anthony Dean Griffey, jazz musicians Ron Carter and Chuck Mangione, composer-conductor Maria Schneider, and composers Dominick Argento, Charles Strouse, Kevin Puts, and Jeff Beal.