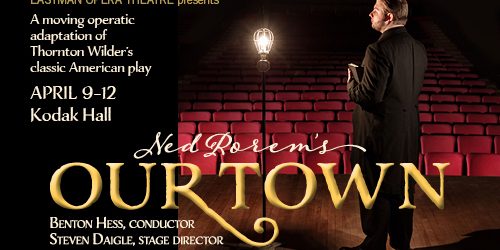 Ned Rorem’s opera treatment of Our Town, the renowned Pulitzer Prize-winning play by Thornton Wilder, will be presented by Eastman Opera Theatre April 9 through 12 in Kodak Hall at Eastman Theatre. The production is the first in upstate New York since the opera’s professional debut at the Lake George Opera in July 2006.

Wilder’s play about treasuring everyday activities during our transient lives has become an American classic and been translated into more than 30 languages. While he was alive, though, the playwright resisted entreaties by such luminary composers as Aaron Copland and Leonard Bernstein for any musical treatment of his work.

Our Town became an opera at the suggestion of poet J.D. McClatchy, a friend of Tappan Wilder, the playwright’s nephew and literary executor. McClatchy persuaded Wilder that the play was more appropriate for operatic rather than musical theater treatment, also being considered at the time. McClatchy approached Rorem, known for his song settings, to write the opera, and the poet wrote the libretto. The work was premiered by the Indiana University Opera Theater in February 2006, followed by the presentation at Lake George and by smaller companies and students around the country.

“Our Town is a universal story that can be transported to any group of people within any society; this production gives it a Rochester context,” said Steven Daigle, professor of opera at the Eastman School of Music and dramatic director of Eastman Opera Theatre. “For two acts, Wilder’s play, as well as the opera, explores community interaction, family life, marriage and love. Then, unexpectedly, we are forced as an audience to look at our own existence and purpose through the end of life and what might or might not be beyond death. Our Town reminds us to look back on the simple routines and interactions of daily life and reflect on the values in the ‘human condition’ that so often are taken for granted.”

Like the play, the opera uses a sparse setting, a bare stage with limited props that can represent all towns and focuses attention on the characters’ words and actions. Our Town revolves around the growing love between Emily Webb and George Gibbs, depicting their story through scenes of daily family and community life. After Emily dies in childbirth, she chooses to revisit the day of her 13th birthday, where she realizes how the living take every moment for granted, not seeing the preciousness of even the most mundane.

The opera Our Town has slight differences from the play, though it preserves the play’s shape and tone. To fit within a practicable musical run time, some scenes from the play were shortened and some characters were eliminated for the opera. The role of the Stage Manager, who narrates and guides the audience through the action, is supplemented by the use of supertitles with background about the town, information that was presented by characters in the play. Unlike the play, which opens with such ordinary morning activities as delivering the newspaper, making breakfast, and gossiping with friends, the opera opens with a funeral.