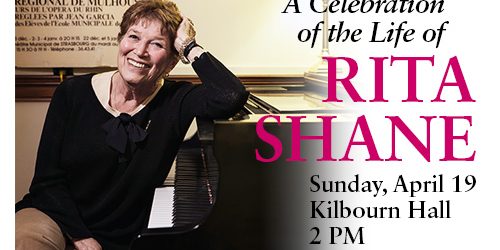 The late Rita Shane, a dramatic coloratura soprano, joined the faculty of the Eastman School of Music as a professor of voice in 1989. She had also taught at Manhattan School of Music, conducted master classes, judged vocal competitions, and maintained a private teaching studio in New York City. Before her death in October of 2014, she taught many singers who went on to national and international fame.

Some of those former students will come to Rochester to join Eastman faculty and students for a tribute in music and words to Professor Shane at 2 p.m. Sunday, April 19, in the school’s Kilbourn Hall.

“What made Rita Shane stand out as a teacher, in addition to her legendary warmth and elegance, was a quality of faithfulness: to the vocal technique that she believed in so completely and conveyed so effectively; to her students whom she supported in so many ways, during and after their years in school; and to a professional standard of singing that she helped sustain in the world’s most important opera houses and concert halls,” said Russell Miller, Professor of Vocal Coaching and Repertoire, and Chair of the Voice & Opera Department.

The tribute program will include reminiscences and duet performances by students who were currently studying with Professor Shane; recordings of her performing, including her signature role as Queen of the Night from The Magic Flute; and appearances by former students.

Professor Shane made her Metropolitan Opera debut in 1973 in Mozart’s The Magic Flute. She went on to be a leading soprano there for 10 seasons. At the time, the New York Times noted her  “powerful, precise, expressive, and intense” performances. She also sang at the Chicago Lyric Opera, San Francisco, Santa Fe, New York City, and many other American opera companies.  In 1979, she sang the lead role in the world premiere of Miss Havisham’s Fire at the New York City Opera.

As an orchestral soloist, Professor Shane performed with the London Philharmonic, Vienna Symphony, Israel Philharmonic, Philadelphia Symphony, and the Cleveland Symphony under the batons of Zubin Mehta, Rafael Kubelik, and James Levine, among others.

“Rita’s extraordinary voice, truly one of a kind, was matched by her warmth, generosity, and fierce loyalty. Her sunny disposition was a gift in my life, and in the community of Eastman,” said Carol Webber, Professor of Voice at Eastman.