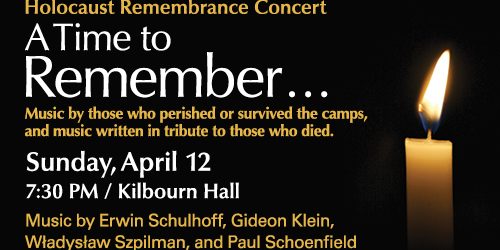 Titled “A Time to Remember . . .” the concert features music written by those who perished or survived the camps, and music written in tribute to those who died. The concert was spearheaded and organized by Associate Professor of Violin Renée Jolles. Her father, Jerome, buried bodies as part of a work detail in Romania during the Nazi occupation. He survived and came to the United States, where he finished his studies at Juilliard in music and composition. A virtuoso accordion player, piano teacher, and composer, Mr. Jolles died in January of last year.

The program includes String Trio by Gideon Klein, a Czech pianist and composer of classical music, and organizer of cultural life in Theresienstadt concentration camp. The string trio was written just a few days he was deported to Auschwitz, from where he was sent to a satellite work camp and died under uncertain circumstances in January 1945.

Among the featured works is Life of Machines by Wladyslaw Szpilman, a Polish classical pianist. Szpilman is widely known as the protagonist in Roman Polanski’s film The Pianist, based on the book recounting his survival in the Warsaw ghetto. He died in Warsaw on July 6, 2000.

Also on the program is Five Pieces for String Quartet by Czech composer and pianist Erwin Schulhoff. In June 1941 he was deported to the Wulzburg Concentration Camp, where he died in August 1942 from tuberculosis.  Five Pieces for String Quartet, dedicated to Darius Milhaud, was written in 1923 and was premiered in 1924 at the International Society for New Music Festival in Salzburg.

In addition, the program will include Sparks of Glory by Paul Schoenfield, a current classical composer known for combining popular, folk, and classical music forms.  Sparks of Glory is based on four true inspirational stories from the Holocaust of survival and the human spirit and was written for the 50th anniversary of the end of World War II.