Organ, Voice, and Dance Spotlighted in ‘The RITE Stuff’ Concert 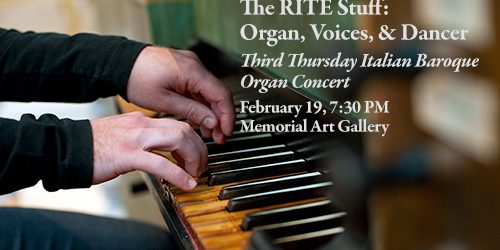 A program of instrumental and vocal music accompanied by dance highlights the Third Thursday Concert with Eastman’s Italian Baroque Organ Series at the Memorial Art Gallery on Feb. 19.

Schola Cantorum is an acclaimed ensemble that specializes in Gregorian chant, Renaissance and Baroque choral music, and choral improvisation. The ensemble has collaborated with Manfred Cordes and Weser-Renaissance Bremen and the Boston Early Music Festival Chamber Players and appears in various festivals and concert series. Selections from its recordings on the Arsis have been regularly broadcast on such national radio series as Pipe Dreams and With Heart and Voice.

Kennedy is instructor of sacred music at the Eastman School of Music and director of music at Christ Church. He has appeared often as an organ soloist in programs of standard repertoire as well as recitals consisting solely of improvisations. He is also a composer of choral, instrumental, and chamber music, has given workshops on choral music, chant, and improvisation in the United States and abroad, and has collaborated on numerous occasions with dancers and choreographers.

Bellotti, associate professor of organ, harpsichord, and improvisation at Eastman, is an internationally renowned improviser, critically acclaimed recording artist, and a leading expert in the performance of Renaissance and Baroque keyboard music. Van Wormer has danced with Ballet Spokane, Spokane Opera, and the Bill Evans Dance Company. Gregory and James are dual-degree doctoral students at the Eastman School of Music, pursuing a DMA in organ performance and a Ph.D. in musicology.

Admission to the Third Thursday concert is included in Gallery admission, which is half-price on Thursday nights and free to UR student ID holders. Seating in the Fountain Court is limited. This concert is made possible by the Rippey Endowed Trust.