German Composer, Pianist Moritz Eggert Will Give Public Recitals While In-Residence at Eastman School of Music 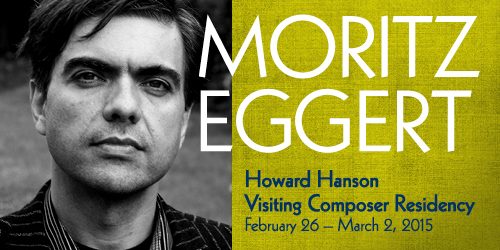 Moritz Eggert, an adventurous German composer and pianist whose works range from chamber music to the 2006 FIFA World Cup theme, is this year’s Howard Hanson Visiting Professor of Composition at the Eastman School of Music.

While he’s in-residence from Feb. 25 through March 3, Eggert will present a multi-media recital at 3 p.m. Sunday, March 1, in Hatch Recital Hall. In addition, he will join Eastman’s Musica Nova under conductor Brad Lubman to perform Goldberg spielt, his take on Bach’s Goldberg Variations, at 8 p.m. Monday, March 2, in Kilbourn Hall. Both performances are free and open to the public.

Eggert is known for incorporating unusual performance elements into his work. In “Hämmerklavier III: One Man Band,” for example, he uses the top and underside of the piano for percussion in addition to playing the keyboard, occasionally with his chin. The concert-length cycle for piano solo, popular with reviewers and audiences alike, is among his best-known works and has been performed around the world.

As a composer, Eggert has written an oeuvre of more than 230 works that cross all musical genres. He has produced 12 operas, several works for dance and music theatre, chamber and ensemble music, vocal and choir music, experimental and electronic music, music for children including the opera Dr. Booger’s Scary Scheme, and film and radio music. He composed a “soccer oratorio” as well as the music for the opening ceremony of the 2006 World Cup.

“Moritz Eggert is one of the most interesting, prolific, and versatile compositional voices in Europe,” said Carlos Sanchez-Gutierrez, professor and chair of composition at the Eastman School of Music. “He is also a virtuosic and unusually fascinating pianist, a distinguished teacher, and a most engaging speaker and general music advocate, a role model whose career serves as a road map for our young composers.”

Eggert has created many genre-crossing projects with performers such as the German electro pop duo 2Raumwohnung and German television entertainer Harald Schmidt. His music challenges the image of what he calls the “well-behaved classical composer”: A collage of Mozart operas was met with heated discussion at the Salzburger Festspiele and his “Footballet” at the Viennese Opera Ball, the first contemporary music to ever be performed there, was described as “desecrating” the event.

Eggert also seeks to provoke discussion in his articles for national and international print and online media. His “Bad Blog of Musick” is considered the most influential blog for contemporary music in Germany. He is a vocal opponent of cuts in arts funding and is a board member of the German Composer’s Association.

Eggert’s musical work has earned such awards as the composition prize of the Salzburger Osterfestspiele, the Schneider/Schott-prize, the “Ad Referendum” prize in Montreal, the Siemens Förderpreis for young composers, and the Zemlinsky Prize.

As a pianist, Eggert regularly collaborates with many artists, including cellist Sebastian Hess, and appears as an orchestral soloist. In 1996, he presented the complete piano solo works of Hans Werner Henze for the first time in one concert. Eggert was a prizewinner at the International Gaudeamus Competitions for Performers of Contemporary Music in 1989. He has played countless premieres of his own and other works in Germany and abroad.

During his residency at the Eastman School of Music, Eggert will also conduct a composition symposium discussion based on his recent article “Preparing Atopy,” which challenges a number of issues in contemporary European art and music; give a lecture on 20th century piano literature; conduct a composition master class; and give private composition lessons to Eastman students.