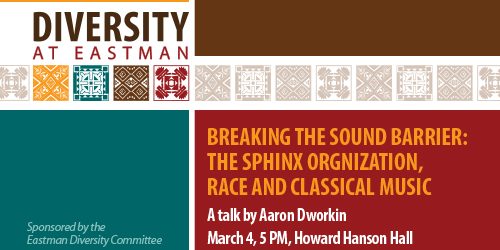 As part of the Identities at Eastman series, the Eastman Diversity Committee is hosting Aaron P. Dworkin, founder and president of the Sphinx Organization, for a talk on Wednesday, March 4, from 5 to 7 p.m. in the Eastman School of Music’s Howard Hanson Hall. The Sphinx Organization is the leading arts organization devoted to transforming lives through the power of diversity and the arts.

A 2005 MacArthur Fellow, a former member of the Obama National Arts Policy Committee, and President Obama’s first appointment to the National Council on the Arts, Dworkin is an author, social entrepreneur, and an avid youth education advocate. He has received extensive national recognition for his leadership and service to communities. His talk at Eastman is titled “Breaking the Sound Barrier: The Sphinx Organization, Race and Classical Music.”

A passionate supporter for excellence in music education and diversity in the performing arts, Dworkin has been a frequent keynote speaker and lecturer at numerous national conferences including the Aspen Ideas Conference, The League of American Orchestras, National Association of Schools of Music, Chautauqua Institution, National Suzuki Association, Americans for the Arts, and the National Association for Negro musicians.

The author of the poetry collection They Said I Wasn’t Really Black, Dworkin has also written the children’s book, The 1st Adventure of Chili Pepperz. His writings have been featured in Symphony magazine, Polyphonic.org, Andante, and other publications.

As leader of The Sphinx Organization, Dworkin has built an infrastructure and led fundraising efforts totaling more than $35 million overseeing a staff and faculty of more than 40. With more than $1 million in prizes and scholarships awarded annually, the Sphinx Organization serves as the leading advocate for young people and diversity in the arts world.