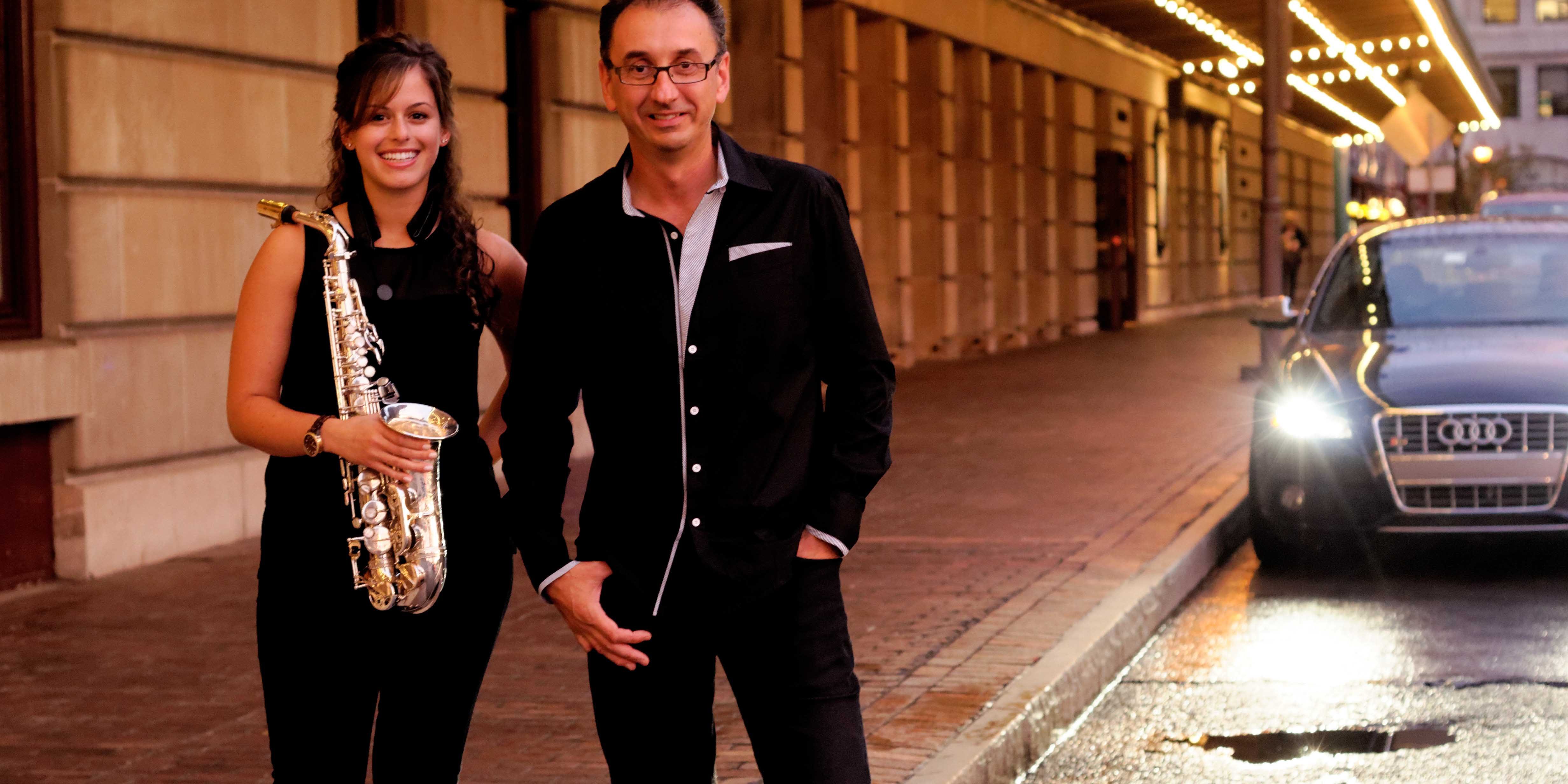 Now, the jazz duo is taking their show further afield, traveling to Poland in March to teach and perform, and to Brazil in June for a series of gigs.

For one week beginning Monday, March 9, Terefenko, an associate professor of jazz studies at the Eastman School of Music, and 2014 Eastman graduate Tarantino will teach and perform at the prestigious Academy of Music in Kraków. During the day, they’ll give recitals of works from their repertoire and will teach master classes on a variety of concepts in jazz and improvisation. Additionally, Tarantino will work with the Academy’s woodwind students and Terefenko will lecture on topics from his book Jazz Theory: From Basic to Advanced Study. In the evenings, the duo will be performing at local jazz clubs and venues.

From June 7 to 17, the two will join fellow Eastman musician Marcelo Pinto in Brazil to perform programs of jazz standards, adaptations of classical works, and Brazilian pieces in a jazz festival and several other venues. Pinto is receiving his Doctor of Musical Arts degree in jazz performance this year.

The international appearances are the highlights of a busy spring schedule that also have Tarantino and Terefenko holding a Rochester CD release event on Saturday, March 7, at 8 p.m. in Sproull Atrium in Eastman’s Miller Center, doing a residency at SUNY Oswego, playing at St. Peter’s Church in New York City, and performing at Rochester Institute of Technology.

“I am incredibly grateful to have these opportunities so soon after graduating. I feel fortunate to have made the connections through Eastman to be able to perform and meet people all over the world,’ said Tarantino. “Dariusz and I are proud of the work we have done so far, and we look forward to seeing where our continued collaboration takes us.”

At Eastman, Tarantino took several classes from Terefenko, and the student and teacher teamed up as performers during her senior year when they discovered mutual interests. Crossing Paths, released in January 2015 on Tarantino’s label Infinite Records, reflects those interests with renditions of works by pianist Lennie Tristano and saxophonist Lee Konitz. Extending their explorations of new melodic and harmonic territories, Tarantino and Terefenko also play their arrangements of works by early 20th-century composer Alban Berg.

The duo’s debut performance came at the January 2014 Jazz Education Network conference in Dallas, where Tarantino received the Mary Jo Papich Women in Jazz Scholarship. The two also presented a clinic based on Terefenko’s textbook. Tarantino and Terefenko then performed in Eastman’s summer concert series, gave a recital for the University of Rochester’s Skalny Center for Polish and Central European Studies, set up in Eastman’s Kilbourn Hall to record Crossing Paths, and released the CD to a Connecticut audience at Hartford’s Baby Grand Jazz Series.

A dual major in jazz saxophone performance and music education, Tarantino performed with Ryan Truesdell’s Gil Evans Project featuring the Eastman Chamber Jazz Orchestra at the 2012 Umbria Jazz Festival in Italy, produced and hosted the weekly radio series Jazz@Eastman: Past, Present, and Future on WGMC Jazz 90.1, and launched and conducted a summer jazz camp for elementary, middle, and high school students at Rockport Music in Rockport, Mass. Tarantino was the 2014 Yamaha Young Performing Artists Competition Saxophone winner and was one of five finalists in the 2014 North American Saxophone Alliance Jazz Competition. She’s also made several appearances at the Xerox Rochester International Jazz Festival, including a walk-on with Earth Wind & Fire in 2014.

Terefenko earned his master’s degree in jazz performance and a Ph.D. in music theory at Eastman. In addition to jazz, he teaches courses in music theory and has published numerous journal articles in both English and Polish. Terefenko maintains an active performance schedule both as a soloist across the United States, Canada, and Europe and as pianist for Rochester’s Smugtown Stompers, an ensemble specializing in New Orleans style jazz and Dixieland. His solo album, Evidence, offers his creative take on favorite jazz standards and jazz instrumentals as well as his own compositions.

Terefenko travels to Poland every year as a visiting jazz professor at the Academy of Music in Kraków, Poland has a robust contemporary jazz scene, with the music first surfacing in clubs in the 1930s. Jazz was suppressed during the Stalinist years, but the Warsaw Jazz Jamboree, started in 1958, has grown into one of the biggest jazz festivals in Europe and, according to Terefenko, was one of Miles Davis’s favorite performance events.

The upcoming trip to Poland is a tremendous opportunity to showcase Eastman students, Terefenko said. “For me, there’s pride in showing how accomplished the students are and it’s a chance to attract new students to come to the school,” he said.