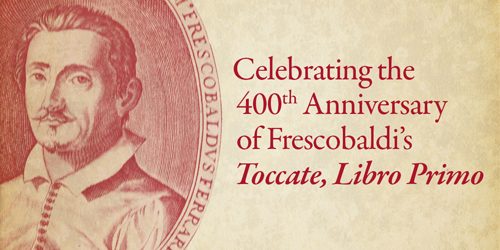 Two departments at the Eastman School of Music are collaborating on a celebration of the 400th anniversary of the publication Primo Libro di Toccate in 1615 by Girolamo Frescobaldi. The five-day event will include lecture presentations, master classes, and performances of the composer’s seminal work.

When Frescobaldi published his “First Book of Toccatas” in 1615, he was in his seventh year as organist at St. Peter’s Basilica, Rome. The work spread throughout Europe and inaugurated a new style of toccata composition whose basic elements are the  “contrasting affects.” The composition was no longer built on the traditional rules of counterpoint but, as Frescobaldi says in his preface, on the emotions, like in the madrigal. Rhetoric, not counterpoint, became the interpretive key. This change made the toccata a journey through the emotions, a story told at the keyboard where, in the absence of text, the performer communicate emotion to listeners through musical figures.

This publication’s fame and success ensured that it spread quickly throughout Europe, influencing many major composers of succeeding generations. The success of the engraved collection is demonstrated by the several reprints it received between 1615 and 1637.

Masterclass: Edoardo Bellotti The First Book of Toccatas at the Organ

Masterclass: Edoardo Bellotti The First Book of Toccatas at the Harpsichord

Masterclass: Edoardo Bellotti The First Book of Toccatas at the Organ

Masterclass: Edoardo Bellotti The First Book of Toccatas at the Harpsichord

Frescobaldi was born in Ferrara, Italy. He was the first of the great composers of the Franco-Netherlandish-Italian tradition who chose to focus his creative energy on instrumental music, especially keyboard music. He was considered the single greatest trendsetter of keyboard music by his contemporary critics.

Aside from his masterful treatment of form, Frescobaldi is important for his numerous innovations particularly in the field of tempo. While his music was influenced by numerous composers, it represents much more than a summary of those influences. His music influenced legendary composers Henry Purcell, Johann Pachelbel, and Johann Sebastian Bach.

Macey is a professor of musicology at the Eastman School of Music. He received a Bachelor of Arts from Occidental College; Bachelor of Arts from California State University-Fullerton; and his Master of Arts,and PhD from University of California-Berkeley. He is the recipient of NEH, American Council of Learned Societies (ALCS), and Schepp Foundation grants as well as the Eisenhart Award for Excellence in Teaching (1990).  He is the author of books and numerous articles. He also serves on editorial boards for numerous publications.

Bellotti is a professor of organ, harpsichord and improvisation at the Eastman School of Music.  A virtuoso organist and renowned improviser, Bellotti performs at leading festivals and concert venues throughout the world. He combines his international performing career with musicological research and teaching, publishing articles as well as new critical editions of the 17th and 18th centuries. He is a frequent guest lecturer at international conferences. He has also made several critically acclaimed recordings on historical instruments.