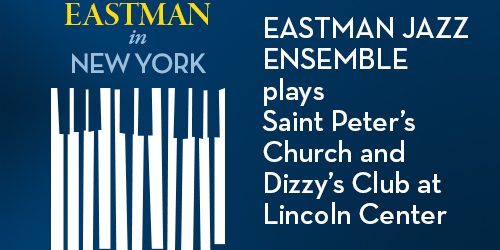 The Eastman Jazz Ensemble is going on the road to New York City in March to give three performances in two days, including appearances at Dizzy’s Club Coca-Cola as part of the Jazz at Lincoln Center series.

In celebration of the 100th anniversary of the birth of composer Billy Strayhorn this year, the ensemble will be joined by saxophonist Dave Glasser for two sets of an all-Strayhorn program at Dizzy’s Club Coca-Cola on Monday, March 2.  The previous afternoon, Sunday, March 1, the group will play during the weekly Jazz Vespers Service at Saint Peter’s Church.

Local audiences can get a preview of the performances at Dizzy’s Club Coca-Cola when the Eastman Jazz Ensemble gives a concert at 8 p.m. Monday, Feb. 9, in Kilbourn Hall.

About 20 Eastman School of Music students will pack their trumpets, trombones, saxophones, and other instruments to make the trek to New York City, a whirlwind trip that has them leaving Rochester Sunday morning and returning on Tuesday.

“Anytime you get to ‘go out’ to perform in front of other audiences is a great opportunity, but New York is something special,” said Bill Dobbins, pianist and director of the Eastman Jazz Ensemble. “This builds enthusiasm for the rest of the semester and for the rest of the year,” he said, noting that the ensemble will play strictly Strayhorn’s music through December.

Strayhorn is best known for his three-decade long collaboration with Duke Ellington, which yielded such classics as “Lotus Blossom,” “Satin Doll,” and Ellington’s theme song, “Take the A Train.” The Eastman Jazz Ensemble’s program at Dizzy’s Club Coca-Cola will include “Tonk,””Wounded Love,” Boo-dah,” “Rain Check,” Strayhorn’s arrangement of Rhapsody in Blue, and the composer’s tribute to Thelonious Monk, “Frère Monk.” In addition, Dobbins and Glasser will team up for “Lotus Blossom.”

Glasser received his bachelor’s and master’s degrees at Eastman in 1984 and 1986, respectively. He performed extensively with the Clark Terry Quintet, the Count Basie Orchestra, and the Illinois Jacquet Big Band. He is on the faculty of the New School jazz program.  Dobbins has performed and recorded with such jazz artists as Clark Terry, Al Cohn, Red Mitchell, Phil Woods, Bill Goodwin, Dave Liebman, Kevin Mahogany, Paquito D’Rivera, Peter Erskine, and John Goldsby. He also has performed with classical orchestras and chamber ensembles under the direction of Pierre Boulez, Lukas Foss, and Louis Lane.

The Eastman Jazz Ensemble’s appearance at Saint Peter’s Church will be a musical tribute to composer, arranger, and teacher Fred Sturm, who died Aug. 24, 2014. Sturm was an Eastman alumnus and faculty member from 1991 to 2002. The ensemble will perform his works “Cerulean Sky” and “Patience” as well as his arrangements of Charlie Haden’s “Silence” and Wayne Shorter’s “Yes or No.”