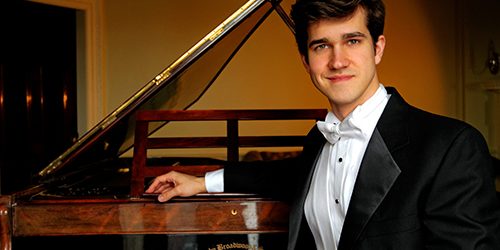 Pianist Cahill Smith, a 2014 DMA graduate of the Eastman School of Music, will make a third appearance in Weill Recital Hall at Carnegie Hall on Saturday, March 14, at 8 p.m.

In a program titled “Forgotten Melodies,” Smith will perform Currier’s Scarlatti Cadences, a 20th-century homage to the 18th-century composer; Liszt’s Vallée d’Obermann; Medtner’s Forgotten Melodies; and works by Scarlatti and Mozart. The recital is part of the Eastman School of Music’s “Eastman in New York” series and is sponsored by the George D. and Frieda B. Abraham Foundation.

Smith’s programming of works by the little-known Russian composer Medtner has attracted the attention of audiences and critics. When he performed Forgotten Melodies, the East Hampton Star described the pieces as “the unexpected gems of the afternoon,” unfamiliar works which “in Mr. Smith’s hands . . . were absolutely endearing.” Smith’s 2013 Carnegie Hall debut featured an all-Medtner program.

During the 2013-2014 season, Smith gave recitals at the Isabella Stewart Gardner Museum’s Calderwood Hall in Boston and at Rice University in Houston, and a lecture-recital on Medtner at Yale University.

Born and raised in Alabama, Smith began playing piano at age 10 and made his orchestra debut six years later with a local orchestra. He received his bachelor’s degree at the University of Alabama at Birmingham and his master’s degree at the University of Michigan. At Eastman, Smith won the Eastman Concerto Competition, held three graduate teaching assistantships, was awarded the Prize for Excellence in Teaching, and was inducted into the honor society Pi Kappa Lambda for his academic achievements and contributions to the musical community at the school.

Currently assistant professor of music at Lee University in Cleveland, Tenn., Smith previously performed in Weill Recital Hall in October 2013 and March 2014 while still a doctoral student at Eastman.  At Lee University, he also teaches as a festival artist for the annual Lee University International Piano Festival and Competition in the summer.