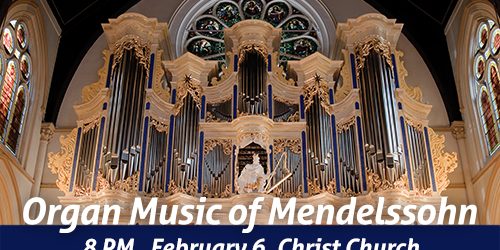 Audiences will have the rare opportunity to hear the entire Eastman School of Music organ department faculty perform during a concert celebrating the 25th anniversary of the founding of the University of Rochester Press and publication of a book edited by an Eastman musicologist.

Edoardo Bellotti, David Higgs, Stephen Kennedy, Nathan Laube, and Anne Laver will perform “Organ Music of Mendelssohn” at 8 p.m. Friday, Feb. 6, on the Craighead-Saunders and Hook & Hastings organs in Christ Church, 141 East Ave. The concert will be introduced by Jürgen Thym, professor emeritus of musicology and editor of Mendelssohn, the Organ, and the Music of the Past: Constructing Historical Legacies. A reception and book signing will follow the concert, which is free and open to the public.

Higgs is one of America’s leading concert organists, performing extensively throughout the United States and abroad, and serving as chair of Eastman’s organ department. Bellotti is an internationally renowned improviser, critically acclaimed recording artist, and a leading expert in the performance of Renaissance and Baroque keyboard music. Kennedy is director of music at Christ Church and its celebrated vocal ensemble Schola Cantorum, and performs solo concerts of standard repertoire and improvisations. Laube has performed in major American and European venues; many of his live performances have been broadcast on the national radio series Pipedreams.  Laver frequently performs in the United States and Europe and has been a featured recitalist and clinician at regional and national organ conventions.

The book Mendelssohn, the Organ, and the Music of the Past explores such topics as the significance of Bach’s music for the Mendelssohn family, homages to Bach in Mendelssohn’s organ compositions, and Mendelssohn’s use of Handel’s oratorios. The chapters, which include lectures from the 2009 Eastman Rochester Organ Initiative Festival on “Mendelssohn and the Contrapuntal Tradition” as well as additional essays from prominent Mendelssohn scholars, shed light on the growing awareness of a distinct German culture following the Napoleonic Wars.

Thym, whose specialties are composers and issues of 19th and 20th century music, is a recipient of the ASCAP Deems Taylor Award for excellence in music writing.  He chaired Eastman’s musicology department from 1982 to 2000 and continues to teach, after his retirement in 2003, on a part-time basis.

The University of Rochester Press was founded in 1989 as a unique collaboration between the University and British publisher Boydell & Brewer Ltd. In the last quarter century, the Press has published more than 600 books across an array of fields while maintaining a focus on selected areas of scholarship, including musicology, African studies, medical history, and European and American history. Two of its series editors are faculty at the Eastman School of Music: musicologist Ralph Locke, for the Eastman Studies in Music series; and musicologist Ellen Koskoff, for Eastman/Rochester Studies in Ethnomusicology.