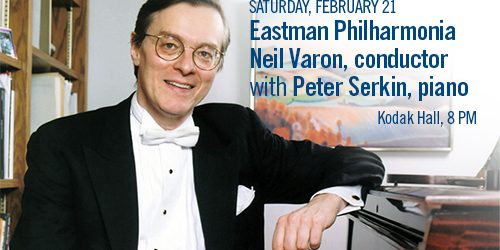 Recognized as an artist of passion and integrity, Serkin is one of the most thoughtful and individualistic musicians appearing before the public today. He will join the Philharmonia in a performance of Piano Concerto No. 19 in F Major by W.A. Mozart; the program also includes Richard Wagner’s Overture from Die Meistersinger and Symphony No. 3 in F Major by Johannes Brahms.

Tickets to the concert range from $20 to $85 for the general public and are available at the Eastman Theatre Box Office, 433 East Main St.; by phone 585-454-2100; by fax 585-454-7885; or online at https://www.esm.rochester.edu/concerts/tickets/. This concert is generously supported by the Fernando Laires Piano Fund created by Professor of Piano Nelita True.

Also a dedicated chamber musician, Serkin has collaborated with Alexander Schneider, Pamela Frank, Yo-Yo Ma, the Budapest, Guarneri, Orion and Shanghai String Quartets, and TASHI, of which he was a founding member.  He continues to explore a diverse repertoire with eminent as well as emerging artists including collaborations with cellist Fred Sherry and pianist Julia Hsu this season.

An advocate of many 20th and 21st century composers, Serkin has been instrumental in bringing to life the music of Schoenberg, Webern, Berg, Stravinsky, Wolpe, Messiaen, Takemitsu, Henze, Berio, Wuorinen, Goehr, Knussen, and Lieberson to audiences around the world. He has performed many important world premieres written specifically for him, including works by Toru Takemitsu, Hans Werner Henze, Alexander Goehr, Oliver Knussen, Charles Wuorinen, and Peter Lieberson.

Serkin’s rich musical heritage extends back several generations: his grandfather was violinist and composer Adolf Busch and his father pianist Rudolf Serkin. Serkin began studying music in 1958 at the Curtis Institute of Music at age 11 and made his concert debut at the Marlboro Music Festival the following year.

Varon was the first Kapellmeister of the Deutsche Opera am Rhein in Dusseldorf and served as the music director of the Südwestfälische Philharmonic and the City of Gelsenkirchen, Germany. As a guest conductor, he has conducted at the New York City Opera, Hamburg State Opera, Stuttgart State Opera, and Berlin Stattsoper, and continues to conduct throughout Europe and Asia. He directed the German premiere of Un Re in Ascolta by Luciano Berio in Düsseldorf, and the world premiere of Erinys by Volker David Kirchner in Wuppertal. He made his Rochester Philharmonic Orchestra debut in 2011 and is one of the orchestra’s regular conductors.

A frequent guest in Asia, Varon led the Tokyo Philharmonic in a series of performances of The Magic Flute for the anniversary Mozart Festival in Japan. He conducted the Korean Symphony in Seoul, the Yomiuri Nippon Symphony in Tokyo, and the Kyushu Philharmonic in Fukuoka.

In December 2014, Varon led the Daegu Symphony Orchestra and four combined choruses in a performance of Beethoven’s Ninth Symphony for the year-end celebratory concert in Daegu, South Korea.   He is conducting four performances of Mozart’s opera The Marriage of Figaro at the Chan Center for the Performing Arts in Vancouver, British Columbia, Feb. 5 to 8.