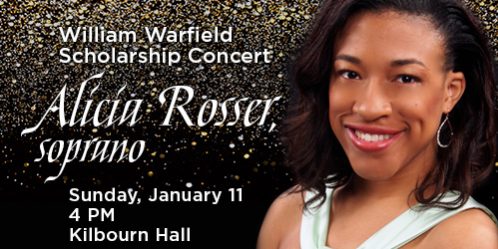 “William Warfield: A Legacy in Music,” the annual concert supporting the William Warfield Scholarship Fund and spotlighting its talented recipients, will feature soprano Alicia Rosser, a sophomore at the Eastman School of Music, at 4 p.m. Sunday, Jan. 11, 2015, in the School’s Kilbourn Hall.

The William Warfield Scholarship Fund was formed in 1977 to provide financial aid to talented and deserving voice students who attend the Eastman School of Music.  Recipients have included soprano Claron McFadden, who performs in opera roles and as a recitalist throughout Europe and is the recipient of the Amsterdam Prize for the Arts; sought-after lyric soprano Nicole Cabell, the 2005 winner of the high-profile BBC Cardiff Singer of the World competition; and bass-baritone Jamal Moore, who was featured with the a cappella University of Rochester Yellowjackets on the national broadcast of The Sing-Off competition in 2011.

At Eastman, Rosser received a Jury Award in her freshman year, and was a soloist in an Eastman Repertory Singers concert. She has worked as a summer resident assistant and currently is an usher with Eastman’s concert office.

Tickets to the concert are $15 for the general public ($10 with student ID), and are available at the door. They are also sold in advance at the Eastman Theatre Box Office, 433 East Main St., by phone (585) 454-2100, or online at https://www.esm.rochester.edu/concerts/tickets/.