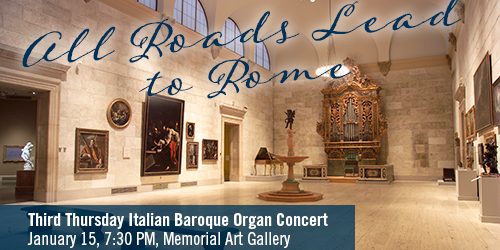 Organist Anne Laver will perform baroque works with a connection to the Eternal City at 7:30 p.m. Thursday, Jan. 15, as part of the Third Thursday Concert with Eastman’s Italian Baroque Organ series at the Memorial Art Gallery.

Titled “All Roads Lead to Rome” – a reference to the city’s role as the hub of the Roman Empire’s system of roads – the concert will feature music from a time period when Rome had risen once again as Europe’s important cultural center.

In the 17th and 18th centuries, the city was home to a who’s who among organ composers of the day – Frescobaldi, Pasquini, Froberger, Muffat, Handel, Kerll, and Scarlatti – and was the backdrop for great musical innovation. The program will explore a sampling of works with a connection to Rome, including an overture to Handel’s opera Flavio, Kerll’s capriccio on the cuckoo’s call, transcriptions of concertos by Corelli and Marcello, and a variety of keyboard toccatas.

A frequent performer in the United States and Europe, Laver has been a featured recitalist and clinician at regional and national conventions of the American Guild of Organists, the Organ Historical Society, the Society for Seventeenth Century Music, and the Eastman Rochester Organ Initiative Festival. In 2010, she was awarded second prize in the prestigious American Guild of Organists’ National Young Artist Competition in Organ Performance.

Laver is assistant professor of Organ and University Organist at Syracuse University’s Setnor School of Music. She also currently serves as instructor and coordinator of organ outreach programs at the Eastman School of Music. Laver has more than 12 years of experience in church music, leading volunteer and professional choir programs in a variety of parishes in New York, Wisconsin, and The Netherlands.