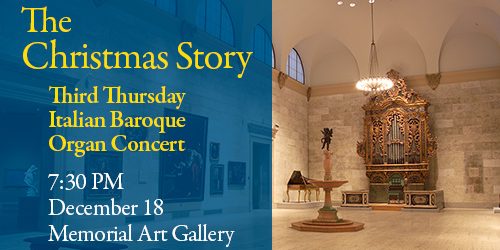 Schütz’s The Christmas Story presents the Nativity story in a series of colorful musical tableaux, interspersed with musical narration by a tenor Evangelist. The gallery concert is presented 350 years after the first publication of this work in 1664.

Schütz (1585-1672) is often regarded as the greatest German composer of the 17th century; his compositional achievements elevated German music to a position of new importance in Europe.  In Schütz’s The Christmas Story, the Nativity narrative is brought to vivid life in a musical setting that continues to be a favorite with audiences today. His colorful score captures the angelic echoes of the Heavenly Host, the gentle song of the Angel, the pastoral piping of the Shepherds, the urgent footsteps of the Wise Men, and King Herod’s irritable fury.

Thatcher Lyman, a doctoral student in organ performance at the Eastman School of Music, will perform the tenor role of the Evangelist. He is director of music at The Lutheran Church of the Incarnate Word and assistant director of the Schola Cantorum vocal ensemble at Christ Church. Käthe Wright Kaufman, a junior studying organ at Eastman, will sing the soprano role of the Angel. She is the first recipient of the VanDelinder Prize in Liturgical Organ Skills at Christ Church and is a member of Schola Cantorum. Baritone Alan Cline, a master’s student in vocal performance at Eastman, will perform the role of Herod. Cline has appeared as a soloist with the Eastman Chorale and Eastman Repertory Singers and will be Mr. Webb in Eastman Opera Theatre’s upcoming production of Ned Rorem’s Our Town.