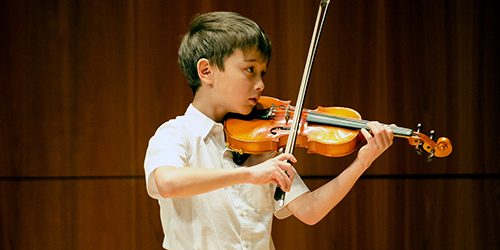 Future violinists have a chance to learn about and try the most prominent instrument in the orchestra when the Eastman Community Music School celebrates Violin Day on Saturday, Dec. 13.

Adults and children can enjoy recitals, watch classes, and try their hand at making music during a string instrument petting zoo. All the activities are free and open to the public.

The day opens with the string instrument petting zoo in the morning and continues through the afternoon:

Instructors, interns, and staff from the Eastman Community School will be on hand to describe and answer questions about the school’s programming. The school currently has approximately 1,600 students, from babies in the early childhood programs to 90-somethings in the New Horizons ensembles. Like the collegiate-level Eastman School of Music, of which it is a part, the Eastman Community Music School was founded by industrialist and philanthropist George Eastman and opened in 1921.

While it has ancient origins, the violin acquired most of its modern characteristics in 16th century Italy. It is played by musicians in a wide variety of genres, including classical, jazz, bluegrass, country, and folk music.