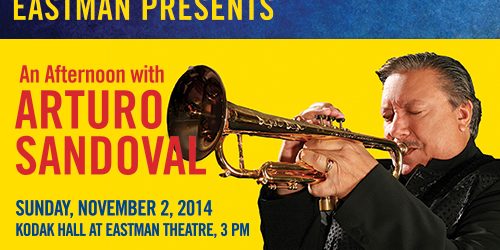 Trumpet virtuoso, Presidential Medal of Freedom recipient, and Grammy Award-winning jazz and classical icon Arturo Sandoval will perform in Kodak Hall at the Eastman Theater with his band Sunday, Nov. 2, at 3 p.m. His appearance is part of  the Eastman School of Music’s new “Eastman Presents” series of guest artists.

A protégé of the legendary jazz master Dizzy Gillespie, Sandoval was born in Artemisa, a small town on the outskirts of Havana, Cuba, on Nov. 6, 1949. He has since evolved into one of the world’s acknowledged guardians of jazz trumpet and flugelhorn, as well as a renowned classical artist, pianist, and composer.

Sandoval will be joined on-stage by Zane Musa, saxophone; Dave Siegel, piano; Teymur Phel, bass; Johnny Friday, drums; and Armando Arce, percussion, all of whom are members of his band.

Sandoval is considered one of the most dynamic and vivacious live performers of our time, and has been seen by millions performing with Celine Dion at the Oscars, with Justin Timberlake at the Grammy Awards, and with Alicia Keys at the Billboard Awards. He has also performed with John Williams and the Boston Pops, and at the Super Bowl with Tony Bennett and Patti LaBelle.

In addition to his 10 Grammy Awards, Sandoval has received six Billboard Awards and an Emmy Award, the latter for composing the entire underscore of the HBO movie based on his life, For Love or Country. His two latest Grammy Award-winning albums, Dear Diz: Every Day I Think of You and Tango “Como Yo Te Siento”, are now available worldwide. Recently released is The Man Who Changed My Life, a book chronicling his relationship with Dizzy Gillespie.

Sandoval is also a renowned classical musician. His Concerto for Trumpet and Orchestra can be heard on Arturo Sandoval: The Classical Album. Sandoval has performed with the foremost symphony orchestras in the United States and abroad, and recorded John Williams’s Trumpet Concerto with the London Symphony Orchestra. His classical artistry has earned him respect and admiration from conductors, composers, and symphony orchestras worldwide.

Sandoval’s compositions can also be heard on the soundtracks for Dave Grusin’s Havana and Random Heart; Mambo Kings with his Grammy-nominated composition “Mambo Caliente”; and on The Perez Family, 61, Mr. Wrong, The Family Fuentes, and the documentary Oscar. He was commissioned by the Kennedy Center to compose the music for the ballets Pepito’s Story and Soul Possessed, as well as for Oman O Men, and The Chocolate Hot Nutcracker, choreographed by Debbie Allen.