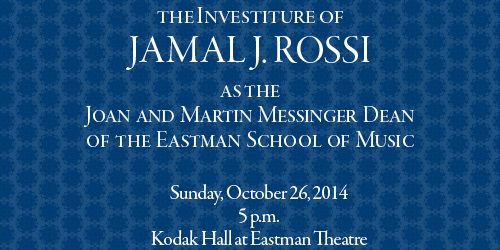 Jazz and classical music performances by faculty, including the dean himself, will highlight the formal investiture of Jamal J. Rossi as the Joan and Martin Messinger Dean of the University of Rochester’s Eastman School of Music.

The inaugural ceremony, at 5 p.m. Sunday, Oct. 26, in Kodak Hall at Eastman Theatre, will also feature the presentation of the Luminary Award to Martin Messinger, a Life Trustee and long-time supporter of programs and initiatives across the University.

University President Joel Seligman will preside over the investiture ceremony. Remarks will be delivered by Arthur Ostrander, retired dean of the School of Music at Ithaca College, where Rossi received his undergraduate degree and served as assistant dean and as associate dean.

Rossi is the seventh dean of the Eastman School of Music. He came to Eastman in 2005 as senior associate dean and served as executive associate dean from 2007 until September 2013, when he was appointed dean following the illness and resignation of former Messinger Dean Douglas Lowry. Rossi was named the Joan and Martin Messinger Dean of the Eastman School of Music in May of this year.

As executive associate dean, Rossi supervised all aspects of the award-winning $47 million project to renovate Eastman Theatre and construct the Eastman East Wing. He oversaw a review of the undergraduate curriculum and led the School’s recent reaccreditation review by the National Association of Schools of Music (NASM). He also founded RocMusic, a collaborative partnership of arts and education institutions in Rochester to establish a free after-school music program for Rochester inner-city students.

Rossi also fostered new partnership projects with Chamber Music America and another with the New World Symphony, and he is developing a new music leadership conference to be launched in the summer of 2015.

An active saxophone soloist and chamber musician, Rossi is featured on numerous recordings, has given solo recitals and performed with bands and orchestras, and is a founding member of the Kilbourn Saxophone Quartet.

The Eastman Luminary Award is given by the Eastman School of Music to individuals who have not only given extraordinary service to music and the arts at the national level, but who have also worked to support the arts at the community level.

Messinger, a managing director of Neuberger Berman, is senior trustee of the Messinger Family Foundation, which he co-founded with his late wife, Joan. Currently a Life Trustee of the University of Rochester, Messinger became a member of the University Board of Trustees in 1989 and soon joined the Trustees Visiting Committee for the Eastman School of Music. He began serving on the Eastman Board of Managers and, later, the Eastman National Council.

In 2003, the Messingers helped provide a new home for the Eastman Community Music School at 10 Gibbs St. In 2011, the couple established the Joan and Martin Messinger Dean of the Eastman School of Music Endowed Fund to provide funding for the dean of Eastman in support of programming and areas of critical need.

Messinger supports a variety of nonprofit organizations. A long-time member of the Memorial Art Gallery, he has shown a keen interest in the arts, especially the craft arts. He has served as a trustee for the Berkshire Theatre Festival, the Museum of Arts & Design (formerly American Craft Museum), and the United Jewish Appeal—Federation of Jewish Philanthropies of New York. He proposed and funded “Contemporary Sculpture at Chesterwood 2014: Selected Works by Albert Paley,” an exhibition at the historic home of American sculptor Daniel Chester French (1850-1931).

The Eastman Brass will perform both the musical prelude and the recessional music for the ceremony. The ensemble is composed of trumpeters James Thompson and Douglas Prosser, hornist W. Peter Kurau, trombonist Larry Zalkind, and tubist Don Harry.