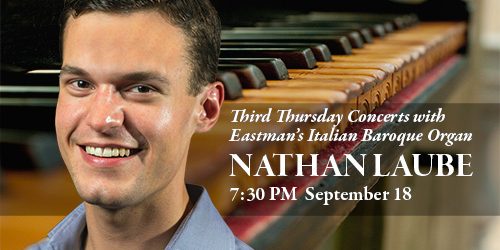 Concert organist and Eastman School of Music faculty member Nathan Laube will present “Rochester’s Italian Baroque Organ, A Musical Cosmopolite”at 7:30 p.m. on Thursday, Sept. 18, in the Fountain Court at the Memorial Art Gallery.Featuring works by Cabanilles, Frescobaldi, Phillips, Rameau, Rossi, and others, the concert opens the 2014-2015 season of Third Thursday Concerts on Eastman’s Italian Baroque Organ at the gallery.

The program will explore the rich world of sound that flourished not only in the homeland of the Italian Baroque Organ, but far beyond its borders in England, Spain, France, and Slovenia when  Jean-Philippe Rameau, Juan Bautista José Cabanilles, and other celebrated virtuosi brought their particular musical sensibilities to this keyboard with quintessentially Mediterranean sonorities.

Considered a rising star among concert organists, Laube has quickly earned a place among the organ world’s elite performers.  In addition to his busy performing schedule, he serves as assistant professor of organ at Eastman.

Recent and upcoming performances by Laube include major venues in the United States and Europe such as Walt Disney Concert Hall, Washington National Cathedral, Schermerhorn Symphony Center, the Sejong Center in Seoul, the Konzerthaus in Vienna, the Philharmonie in Berlin, and La Maison Radio France in Paris.

Laube has performed six extensive tours of the United Kingdom, and has also appeared at many of Europe’s great music festivals, including the 2011 Lahti Organ Festival in Finland, the 2012 Dresden Music Festival in Germany, the 2013 Orléans Organ Festival in France,  the 2014 Naumburg Orgelsommer in Germany, and he will appear for the 300th Anniversary Festival of the Gottfried Silbermann Organ in Freiberg, Germany. Many of his live performances have been featured on American Public Media’s series Pipedreams.

Laube has won top prizes at several distinguished competitions, including the “Stipendium des Bundespräsidenten” (Scholarship of the President of Germany) at the 2012 Felix Mendelssohn Preis in Berlin and First Place at the 2004 National Albert Schweitzer Organ Competition.

As the recipient of a German DAAD Fellowship Scholarship, Laube studied at Musikhochschule in Stuttgart, Germany, where he received his master’s degree in organ. Laube was a recipient of a William Fulbright Grant and spent the 2010-2011 academic year studying at the Conservatoire à Rayonnement Régional de Toulouse, where he was awarded the Prix de Spécialisé with the mention “Très Bien” and “Féliciations du Jury” – the two top honors – in addition to the Prix François Vidal from the city of Toulouse.

Laube earned his Bachelor of Music Degree at the Curtis Institute of Music in Philadelphia, graduating with the Institute’s two highest awards, the Landis Award for Excellence in Academics and the Aldwell Award for Excellence in Musical Studies. During his time at the Curtis Institute, Nathan also served as an assistant organist at the Wannamaker Grand Court Organ at Macy’s Department Store in downtown Philadelphia.

Admission to the concert is included in Gallery admission.  The concert is made possible by the Rippey Endowed Trust.