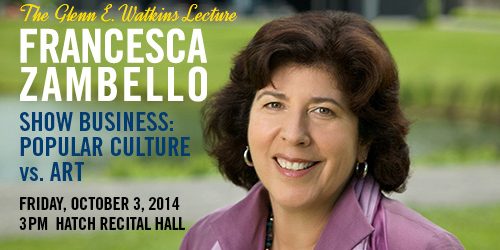 Francesca Zambello, artistic director of the Washington National Opera and artistic and general director of the Glimmerglass Opera, will give the Eastman School of Music’s 2014 Glenn E. Watkins Lecture on Friday, Oct. 3, at 3 p.m. in the school’s Hatch Recital Hall. Zambello’s lecture, titled “Show Business: Popular Culture vs. Art,” will be followed by a reception in the Wegman Family Gallery at 4 p.m.

Since 1984, Zambello has worked to produce new music theater works, innovative productions, and theater and opera for wide audiences across the United States and Europe. Zambello’s work has been produced by the Metropolitan Opera, Teatro alla Scala, Lyric Opera of Chicago, and Paris Opera. She has staged plays and musicals on Broadway, at the Royal National Theatre, Sydney Festival, Disneyland, and the Kennedy Center, among other venues.

Zambello has been awarded the Chevalier des Arts et des Lettres by the French government for her contribution to French culture and the Russian Federation’s medal for Service to Culture. Her work has been described in The New Yorker as “psychologically probing,” and in The New York Times as “imaginative” and “inspired.” During a 2011 production of Wagner’s Ring Cycle at the San Francisco Opera, The New York Times wrote, “Zambello and her production team were heartily cheered, something that does not often happen when Wagner lovers see boldly contemporary productions of the Ring.”

Most recently, Zambello developed and directed the world premiere of Christopher Theofanidis’ Heart of a Soldier for the San Francisco Opera, where she served as artistic advisor from 2006-2011. Other recent opera projects have included the first international production of Carmen ever to be presented at the National Center for the Performing Arts in Beijing and the world premiere of An American Tragedy at the Metropolitan Opera.

The Glenn E. Watkins Lecture was established in 2003 by Eastman School of Music alumnus Glenn Watkins to bring an exceptional lecturer in the field of music and related humanistic disciplines to speak at the school.  Watkins received his Ph.D. in musicology at Eastman in 1953 and is considered one of the most distinguished musicologists of our time. His scholarly impact ranges from his pioneering studies of Renaissance composer Carlo Gesualdo to his influential books on musical modernism, its postmodern consequences, and music in World War I.  An Honorary Member of the American Musicological Society, Watkins is the Earl V. Moore Professor Emeritus of Music History and Musicology at the University of Michigan and the 2012 recipient of the University of Rochester’s Distinguished Scholar Award.