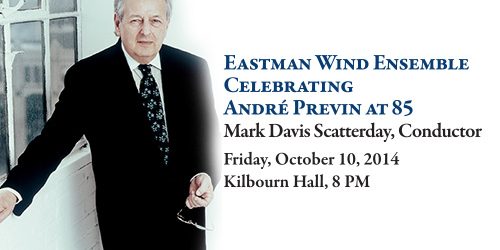 A new work by André Previn, the celebrated conductor, composer, pianist, and Oscar and Grammy winner, will receive its world premiere in a concert by the Eastman Wind Ensemble at 8 p.m. Friday, Oct. 10, in Kilbourn Hall at the Eastman School of Music.

Under conductor Mark Davis Scatterday, the ensemble will perform Music for Wind Orchestra (No Strings Attached) as part of an all-Previn program featuring several of the composer’s chamber music pieces. Previn, whose international and diverse career spans almost seven decades, will be at Eastman and will receive an Honorary Doctor of Music degree from the University of Rochester during the concert.

Previn is the recipient of Lifetime Achievement awards from the Kennedy Center, the London Symphony Orchestra, Gramophone Classic FM, and The Recording Academy, and an honorary knighthood. During his three-day residency at Eastman, Previn will attend rehearsals of his works and meet with composition, conducting, piano performance, and accompanying students.

“This is a great opportunity for our students to see and work with a musician who, many years ago, started building the type of multi-faceted career that’s crucial in today’s changing music world,” said Scatterday. “An incredibly diverse musician as a pianist, conductor, and composer,  Previn is a role model for the type of entrepreneurship students need to develop to succeed in the professional music world.”

In addition to Music for Wind Orchestra (No Strings Attached), the Oct. 10 concert will include Previn’s Trio for Oboe, Bassoon, and Piano; Octet for Eleven; Triolet for Brass; and Vocalise for Soprano, Cello, and Winds. Tickets are $15 (free with UR ID), and are available at the Eastman Theatre Box Office, 433 East Main St. (in the Eastman East Wing), 585-454-2100, eastmantheatre.org .

Previn, who turned 85 in April, began studying piano in Berlin when he was six years old and quickly showed his musical gifts. In 1939, his family settled in Los Angeles, where Previn played jazz in night clubs, took composition lessons, and got his first studio job at 16 as an orchestrator at MGM. When composing for films, Previn was expected to conduct the studio musicians, and he honed his skills by also leading them in symphonic repertoire and conducting the California Youth Symphony Orchestra.

Previn’s first credited film score was the 1949 Lassie movie The Sun Comes Up. His work can be heard in more than 50 films, including Elmer Gantry, Long Day’s Journey Into Night, Bad Day at Black Rock, and Inside Daisy Clover. Previn’s scores received 14 Academy Award nominations, earning Oscars for Gigi, Porgy and Bess, Irma la Douce, and My Fair Lady.

In the late 1960s, Previn turned his focus to classical music. He served as music director of the Houston, London, and Pittsburgh Symphony Orchestras, and of the Los Angeles and Royal Philharmonic Orchestras. He has been a guest conductor with countless other orchestras.

As a pianist, Previn is held in esteem for his work in both jazz and classical genres. He has collaborated with such jazz musicians as Shelly Mann, Oscar Peterson, and Ray Brown, and performed and recorded with sopranos Renée Fleming and Barbara Bonney, violinist Anne-Sophie Mutter, and members of the Boston Symphony, London Symphony, and Vienna Philharmonic orchestras.

Previn’s recording career began in the mid-1940s, when he made two jazz recordings for RCA. In the 1950s, he recorded music by composers such as Barber and Hindemith. As a conductor, he recorded with the St. Louis Symphony, the Royal Philharmonic, and the London Symphony. He also performed and recorded with the Boston Symphony, New York Philharmonic, Vienna Philharmonic, and many other orchestras. Previn has received several Grammys, and was honored with a Grammy Lifetime Achievement Award in 2010.

Previn’s compositions include concertos for cello, guitar, and piano; works for chamber ensembles; and numerous short works for orchestra. He has written two operas, including A Streetcar Named Desire, composed with Fleming in mind for the role of Blanche.