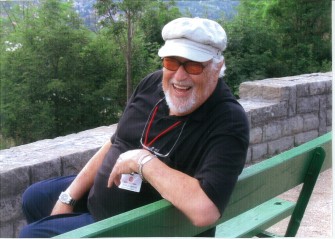 Donald J. Shetler, professor emeritus at the Eastman School of Music of the University of Rochester and a bold pioneer in the field of music education, died Saturday, May 31, in Mount Pleasant, S.C.  He was 87 years old.

Known internationally for his research in fetal music response and arts education curriculum development, Professor Shetler enjoyed a career that included teaching in public schools and at the university level, musical performance, academic study and writing, and serving as a consultant to educational institutions and professional organizations. In 2009, the Eastman School established the Donald J. Shetler Prize to honor his contributions to music education, and he is the subject of the 2012 biography A Curious Mind: The Life and Legacy of Professor Donald J. Shetler by Christopher P. Gordon.

“Characterized by vision, innovation, and a curious mind, Don Shetler was a leader in the profession,” said Richard F. Grunow, Professor of Music Education at Eastman. “Perhaps most important, he was a versatile musician, continuing to teach and perform his entire life. Days before his passing, he was in the studio recording a piece written for his string quartet. For more than two decades, he and his wife Jean contributed in numerous ways not only to the Eastman School of Music, but also to the entire Rochester community. Don lived a full life.”

Born July 22, 1926, in Bad Axe, Mich., Professor Shetler received his Bachelor of Science degree in music education from East Tennessee State University, graduating first in his class of 300 in 1949. He went on to earn his Master of Music and Ed.D in Music degrees at the University of Michigan in 1951 and 1961, respectively. His dissertation was the first to employ computer data analysis and focus on the new field of educational television. He also studied cello and trumpet at Michigan.

From 1951 to 1960, Professor Shetler was director of instrumental music in the Ann Arbor, Mich., public schools, where his bands and orchestras were awarded top ratings. He then taught for five years at Western Reserve University in Cleveland, serving as assistant professor, associate professor, acting chairman, and chairman of the music department. He conducted the University Circle Wind Ensemble and the University Circle Chorale and also was adjunct professor at the Cleveland Institute of Music.

Professor Shetler joined the faculty of the Eastman School of Music in 1965. He served as chair of the music education department for six years, directed the Ph.D. and master’s degree programs, and taught courses in research, curriculum design, and the psychology of musical behavior until his retirement from full-time teaching in 1988.

“Don Shetler was a visionary music educator, who championed many major innovations in music education, including the Suzuki approach, Orff Schulwerk, and creative use of media in the music classroom,” said Donna Brink Fox, Senior Associate Dean of Academic and Student Affairs at Eastman. “His research earned international attention for topics as varied as prenatal music response and early studies of performance injuries among orchestral musicians. Throughout his time at Eastman, he was concerned for the future of music education, often hosting significant conferences that brought together leaders in the profession.”

In 1980, based on his work directing the Suzuki Talent Education Program at Eastman and conversations with a student about the book The Secret Life of the Unborn Child, Professor Shetler began studying prenatal response to music. He asked expectant mothers to place headphones on their abdomens, playing classical music twice daily beginning in their fifth month of pregnancy. After the babies were born, he followed and videotaped their responses to music as they grew from infancy into toddlerhood and tracked their development of language and memory skills. Professor Shetler’s study was reported widely by the media and is often cited by other researchers. He also wrote about his study for the Music Educators Journal.

The director of a number of research projects, Professor Shetler headed a study funded by the National Endowment for the Arts of the education, training, and career development of symphony orchestra musicians. Among its early findings, according to a Dec. 21, 1977, New York Times article, was that the average age of musicians in orchestras at the time was about 37 years and the median income, based on 1975 figures, was $17,200, not including any additional fees or teaching income.

Professor Shetler was the first Eastman faculty member to be awarded a University of Rochester Bridging Fellowship, which supports interdisciplinary study by faculty members in schools across the University. He organized the Cluster for Music Cognition and Development with the University’s School of Medicine and Dentistry and with the psychology department in the College of Arts and Sciences.

Professor Shetler was also known for his creative use of instructional media techniques in music teaching and learning. He wrote Film Guide for Music Educators, published by the Music Educators National Conference; was the audio-visual editor of The Instrumentalist; and served as the editor of Triad, the magazine of the Ohio Music Education Association. He is the author of the book In Memoriam Howard Hanson: Future of Musical Education in America. His articles on music education appeared in such publications as the Journal of the International Society for Music Education, the Music Educators Journal, the Journal of the College Music Society, and the Bulletin of the International Music Council.

A visiting professor at 22 colleges, Professor Shetler also served as an institutional, educational and curriculum consultant to public school systems and music education associations in several states; to numerous universities including Iowa State College, Indiana University, the University of Wisconsin, Howard University, and Interamerican University; and to International Society for Music Education commissions in Finland, Austria, Germany, and Japan. He also lectured in Denmark, Holland, England, and Brazil.

As a musician, Professor Shetler served as principal cellist and assistant conductor of the Cleveland Philharmonic Orchestra. He also was a cellist in the Ann Arbor, Jackson, and Toledo orchestras and played trumpet with several jazz groups.

Following his retirement from the Eastman School of Music in 1988, Professor Shetler moved to South Carolina, where he established the Arts Education Consulting Services and was Adjunct Professor of Music at Charleston Southern University. He founded the chamber music ensemble “Fiori da Musica” and was its cellist and musical director. He also conducted the College of Charleston Community Orchestra from 1989 to 1990 and was a cellist in the Florence and Long Bay symphony orchestras.

Professor Shetler is survived by his children, Pam Coopersmith of Mount Pleasant, S.C., Kerry Cassidy of Vernon, Vt., and musician, composer, and teacher Donn Scott Shetler, who has worked with such singers as Johnny Mathis, Gene Pitney, Michelle Willson, and Johnny Adams, and his wife, Jill Gross, of Boston, Mass.; grandchildren, Jesse Coopersmith and his wife, Mihaela, of Mount Pleasant, S.C., Melissa Shetler of New York, N.Y., and Katelyn Bosley and her husband, Keith, of Newport, Ore.; great-grandchildren, Anna Coopersmith, Lucas Coopersmith, Stella Bosley, and Evie Bosley; and his brother, Jerold Shelter and his wife, Jane, of San Antonio, Texas.

A memorial service will be held on Saturday, June 14, at 11 a.m. in St. Philip’s Church located at 142 Church St. in Charleston, S. C.  The service will include music performance under the direction of church organist/choirmaster Capers Cross.

Contributions in memory of Professor Shetler may be made to “Shetler Family Scholarship Fund,” c/o The Charleston Music Club, 1071 Deleisseline Blvd., Mt. Pleasant, SC 29464. A memorial message may be sent to the family on the J. Henry Stuhr funeral home website.