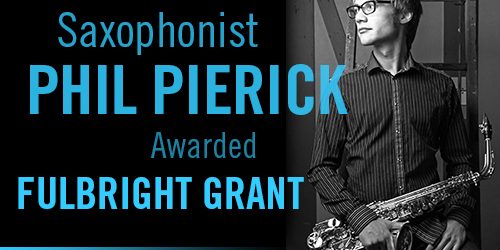 Saxophonist Phil Pierick, a doctoral student at the Eastman School of Music, has received a Fulbright Study/Research Grant and will spend the 2014-2015 academic year in Austria. There, he will be studying contemporary music performance practice with Lars Mlekusch at the Konservatorium Wien Privatuniversität in Vienna.

A staunch advocate for new music, Pierick has commissioned more than a dozen new works and presented premieres in Europe, North America, and Asia. Together with Noa Even, he formed Ogni Suono in 2009 to expand and promote contemporary music for saxophone duo. They collaborate regularly with composers and other performers, presenting diverse performance and educational outreach programs across the United States and abroad.

Pierick is a recent recipient of the Eastman School of Music Teaching Assistant Prize. He was named a Vandoren Emerging Artist in 2011, is a three-time prizewinner of the Music Teachers National Association (MTNA) National Young Artist and Chamber Music Competitions, and took third prize in the inaugural International Saxophone Symposium and Competition. As the national winner of the 2009 Frank Huntington Beebe Fund for Musicians, Pierick studied with Jean-Michel Goury in Paris at the Conservatoire a rayonnement régional de Boulogne-Billancourt.

Currently, Pierick is in his second year of DMA studies in the studio of Associate Professor of Saxophone Chien-Kwan Lin and serves as the undergraduate saxophone coach. Pierick received both his Bachelor of Music and Master of Music degrees from the University of Illinois at Urbana-Champaign in 2009 and 2012, respectively.

After finishing his year of Fulbright study in Vienna, Pierick will return to Eastman to complete coursework for his doctorate.

“I look forward to sharing my contemporary music experiences with the Eastman community when I return from Austria,” said Pierick.  “I hope to increase my involvement with OSSIA (student-run new music ensemble) and perhaps even form another contemporary chamber ensemble at Eastman. My project in Vienna will involve performing new music in unexpected spaces in the city, a concept that I believe transfers well to the Rochester community.”

Said Lin, Pierick’s teacher, “Phil is the quintessential Eastman DMA student, a first-class performer who is also eloquent in many musical subjects, He approaches every assignment I give him with sophistication, and works hard to achieve a level of excellence.  I’m sure there are many deserving students for the Fulbright Grant, and I’m just thrilled that his hard work gets recognized in such a splendid way.”