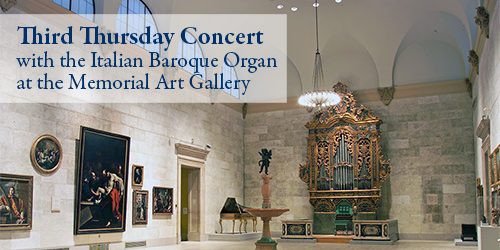 Music and motion combine in an upcoming performance on the Eastman School of Music’s Italian Baroque Organ at 7:30 p.m. Thursday, April 24, in the Fountain Court at the Memorial Art Gallery.

Titled “Organ and the Body,” the program showcases the collaborative work of three choreographers and four musicians, each responding to the artwork and environment of the gallery.

Organist Stephen Kennedy and choreographer Vanessa Van Wormer have collaborated on the new work “Here, but Then” for four dancers and organ, based on Monet’s painting “Waterloo Bridge, Veiled Sun.” Van Wormer also worked with cellist Hilary Glen on “The Quick Bloom and Slow Fade of All Things,” a dance responding to the Kodaly Cello Sonata, Op. 8, and inspired by the physical effect of time on art.

Kennedy is instructor of sacred music at Eastman and director of music at Christ Church in Rochester. He has appeared often as an organ soloist in programs of standard repertoire as well as recitals consisting solely of improvisations. He is also a composer of choral, instrumental, and chamber music, has given workshops on choral music, chant, and improvisation in the United States and abroad, and has collaborated on numerous occasions with dancers and choreographers.

Petit is Director of Music at St. Paul’s Lutheran Church in Pittsford, organist for the University of Rochester’s Protestant Community Chapel, and is a member of the Christ Church Schola Cantorum.  He completed his DMA in organ performance and literature at the Eastman School of Music in the studio of David Higgs.

Glen is completing her DMA in cello performance at the Eastman School of Music with Alan Harris.  She has performed with the Rochester Philharmonic Orchestra and was awarded a full-time position with the New World Symphony of Miami, Florida.  She teaches at Hochstein School of Music and Eastman, and runs a collaborative company, Chamber Ballet Brockport.

Parquette is a visual artist and dance instructor currently residing in Rochester.  He is a former member of The Colorado Ballet, The Maryland Ballet, Ballet Mississippi, Ballet El Paso, and The West Virginia Dance Company.  Brad has been a member of the faculty of The West Virginia Governor’s School for the Arts, The School of the Maryland Ballet, and Greensboro Ballet, and served as director of dance at The Performing Arts School of Worcester (MA). He taught as adjunct faculty at The University of North Carolina at Greensboro and has been a frequent guest teacher for The Professional Dance Teacher’s Association.

Oakes is Visiting Assistant Professor of Dance at the College at Brockport.

The Italian Baroque Organ was built around 1770 in central Italy. Restored and installed in 2005 at the Memorial Art Gallery, the instrument is the only one of its kind in North America. Its beautiful authentic sounds have been heard by thousands of people who have come to the weekly Sunday mini-recitals or the special monthly concerts by internationally known guest artists and Eastman musicians.