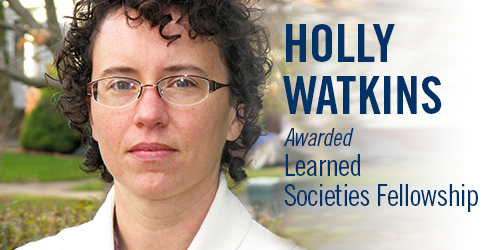 Holly Watkins, associate professor of musicology at the University of Rochester’s Eastman School of Music, has been awarded a 2014-2015 American Council of Learned Societies (ACLS) Fellowship to support work on her new book, Echoes of the Nonhuman: Organicism, Biology, and Musical Aesthetics from the Enlightenment to the Present.

One of only 65 scholars from more than 1,000 applicants to receive the competitive grant, Watkins will be on leave next year to continue her research and writing on the project. Her book explores why

19th-century writers on music tended to compare music to the growth of plants or to other aspects of the nonhuman world, and examines the cultural and scientific contexts of such comparisons. Philosopher Arthur Schopenhauer, for example, connected the voices of four-part harmony—soprano, alto, tenor, and bass—to the human, vegetal, animal, and mineral kingdoms, while musician and writer E.T.A. Hoffman compared the structure of a Beethoven symphony to that of a tree.

Watkins will also approach her subject from the viewpoint of biomusicology, the field which studies the biological aspects of musical production and the physical and emotional experience of music in humans. Biomusicology is also concerned with animal sound production and with the meanings and purposes shared by human and animal uses of sound.

“Through this research, I hope to transform the 19th-century preoccupation with music’s relationship to nature into a new source of inspiration in the modern era, which is profoundly marked by ecological crisis,” said Watkins.

Watkins’s research and teaching center on the aesthetics and philosophy of music, ecocriticism, posthumanism, and gender studies.  She is the author of the book Metaphors of Depth in German Musical Thought: From E.T.A. Hoffmann to Arnold Schoenberg (Cambridge University Press, 2011). Her articles have appeared in the Journal of the American Musicological Society, 19th-Century Music, Current Musicology, and Contemporary Music Review.

In 2010-11, Watkins held a Harrington Faculty Fellowship at the University of Texas at Austin, and she participated in the Mannes Institute on Musical Aesthetics in 2010. She has presented numerous papers at the annual meetings of the American Musicological Society, the International Association for the Study of Popular Music, and the Look and Listen Festival in New York City. Watkins received her Ph.D. in musicology from the University of California, Berkeley, after completing a master’s degree in musicology and a bachelor’s degree in physics at the University of Virginia.

The American Council of Learned Societies is a private, nonprofit federation of 71 national organizations supporting American scholarship in the humanities and related social sciences.