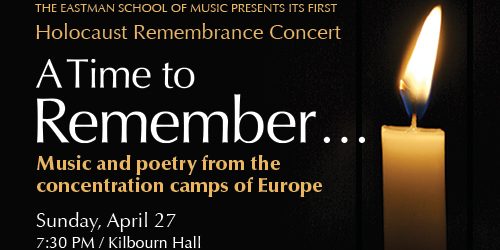 Works by Jewish composers who died in or survived the atrocities of World War II will be performed by Eastman School of Music faculty and students in a concert to mark Yom HaShoah (Holocaust Remembrance Day) on Sunday, April 27.

Titled “A Time to Remember . . .”, the concert was spearheaded and organized by Associate Professor of Violin Renée Jolles. Her father, Jerome, buried bodies as part of a work detail in Romania during the Nazi occupation. He survived and came to the United States, where he finished his studies at Juilliard in music and composition. A virtuoso accordion player, piano teacher, and composer, Mr. Jolles died in January of this year.

The program includes Mr. Jolles’s work “A Prayer for Peace” for clarinet and harp, written for his wife, harpist Susan Jolles, and famed Israeli klezmer and classical clarinetist Giora Fiedman.  Other pieces include “Suite for Oboe and Piano” by Pavel Haas, who was an exponent of Leon Janáček’s school of composition, and Sonato for Solo Violin by Erwin Schulhoff, who found inspiration in jazz rhythms and avant-garde Dadaism. Haas died in the gas chambers at Auschwitz-Birkenau, while Schulhoff died of tuberculosis at the Wülzburg concentration camp.

Also on the program is Rosalie Wertheim’s “Three Songs for Flute, Voice, and Piano.” Wertheim gave secret concerts in the Netherlands by banned Jewish composers before going into hiding to escape the Jewish deportations. She survived the war but, weakened by the ordeals, died in 1949.

The concert will also feature a jazz work written by trumpeter John Sneider. The piece is a tribute to violinist and trumpeter Louis Bannet, known as “The Dutch Louis Armstrong.” Sent to Birkenau in 1943, Bannet was one of only 20 in a transport of 500 people not immediately sent to the gas chambers, and his subsequent  survival is credited to his extraordinary talent. He died in 2002 in Canada.

Admission: $10 (free for UR ID holders), at the door only