Vocal Accompanist Graham Johnson To Give Master Classes at Eastman 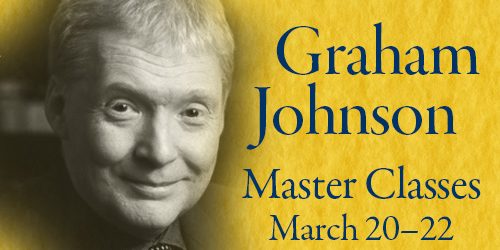 Graham Johnson, one of the world’s leading vocal accompanists and song scholars, will be in residence at the Eastman School of Music from Thursday, March 20, through Saturday, March 22. His schedule will include master classes for singers and pianists on art song in various languages as well as a talk on the vocal writing of Francis Poulenc.

A pioneer in the piano vocal accompaniment world, Johnson has enjoyed a successful career as a performer, collaborator, author, and educator. The Independent newspaper in London described him as “indefatigable . .  .  the one-man powerhouse behind a remarkable flowering of accompanied performance and recording over the past four decades.” Johnson studied piano at the Royal Academy of Music and was greatly influenced in his accompaniment career by composer/conductor Benjamin Britten. In search of creative new ways to explore the art song repertory, Johnson founded the Songmakers Almanac in 1976, an English ensemble that seeks out neglected piano/vocal works and builds recitals incorporating several singers. Johnson has planned and accompanied more than 150 Almanac recitals with such distinguished singers as Sir Thomas Allen, Victoria de los Angeles, Peter Schreier, Arleen Auger and Philip Langridge.

Johnson’s dedication to vocal accompaniment includes regular presentations at the summer recital cycle for the London South Bank and Wigmore Hall series. He has also recorded the complete Schubert lieder—more than 600 works—as well as the complete Schumann series. Johnson was The Royal Philharmonic Society’s Instrumentalist of the Year in 1998, was elected Royal Swedish Academy of Music member in 2000, was awarded the Chevalier in the Ordre des Arts et Lettres by the French government, and was made an Honorary Member of the Royal Philharmonic Society in February 2010.

In 1995 and 2011, Johnson gave master classes and a two-hour lecture at Eastman on Franz Schubert’s art of accompaniment. “It’s rare to see experts in their own field—the voice faculty at Eastman—spellbound, and rare to see the students grabbing for pen and paper to write down the words of wisdom surrounding them,” said Eisenhart Professor of Voice Carol Webber. “Such was the scene during Graham Johnson’s master classes presented here in 1995. His upcoming residency will again create that magic.”

Said Professor of Vocal Coaching and Repertoire Russell Miller, “Graham Johnson is unquestionably one of the world’s leading authorities on song of all kinds. I was privileged to coordinate and observe his classes at the Music Academy of the West, and use his exhaustive catalogue of annotated recordings and reference works weekly in my own teaching at Eastman. To have him back yet again is a dream fulfilled for both the Voice & Opera Department and our Accompanying Program.”

Johnson’s residency is sponsored by the Eastman School’s Voice & Opera Department, the Accompanying Program, and the Department of Musicology, with substantial support from the Friends of Eastman Opera.

“We are very grateful to the Friends of Eastman Opera for their very generous and consistent support of programs and productions,” said Miller. “Their assistance allows the department to give students experiences such as Graham Johnson’s master classes that deepen their knowledge and preparation for their vocal careers.”