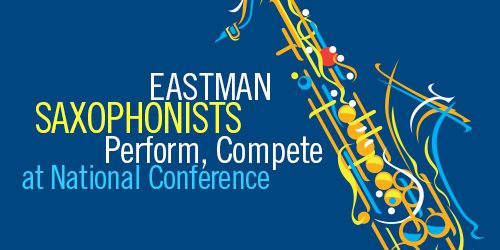 Eastman School of Music saxophonists will be performing both as invited guest artists and as competition participants at the North American Saxophone Alliance (NASA) Conference at the University of Illinois at Urbana-Champaign from Thursday, March 20, through Sunday, March 23.

The Eastman Saxophone Project, created in 2010 as a conductor-less saxophone ensemble, will be featured in the conference’s Saturday evening chamber music concert performing Rhymes with Silver by Assistant Professor of Music Theory Ted Goldman. The group will also appear in the Saxophone Ensemble Showcase on Sunday morning and will present the world premiere of Skylark Lullaby by Jennifer Bellor (PhD ’13). In addition, the award-winning saxophone quartet Project Fusion will perform in the conference’s Quartet Series on Sunday morning.

In addition, Eastman School of Music Dean Jamal Rossi will be one of the judges for the classical saxophone competition finals, is participating in a panel titled “D.M.A or J.O.B: Pathways to Employment in the Academy and Beyond,” and will perform with Professor Steven Mauk of Ithaca College. Associate Professor of Saxophone Chien-Kwan Lin will be judging the final round of the collegiate solo competition and will be featured in the Selmer Artist Showcase Concert.

The North American Saxophone Alliance is an organization made up of professional performers, university professors, public school teachers, students of all levels, and others who have an interest in the saxophone. Its biennial conference features jazz and chamber music concerts, master classes, lectures, and exhibits. This year’s event honors the 200th birthday of instrument designer and saxophone inventor Adolphe Sax and the 20th anniversary of the first NASA biennial conference.