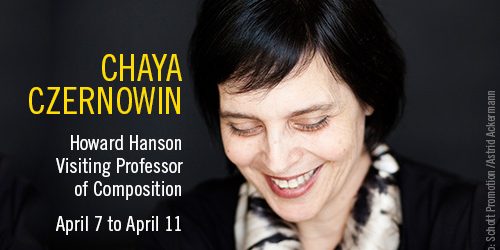 Israeli-born composer Chaya Czernowin, whose works present challenging sonic landscapes of atypical and complex structures, will be at the Eastman School of Music from Monday, April 7, to Friday, April 11.

During her residency as the Howard Hanson Visiting Professor of Composition, Czernowin will hold master classes, meet privately with composition students, and attend rehearsals of Eastman’s new music ensemble Musica Nova, which will present a concert of her works at 8 p.m. Wednesday, April 9, in Kilbourn Hall.

In a Boston Globe interview last fall, Czernowin said she strives to create an almost physical listening experience, partly by making it unfamiliar and new. To that end, she uses unconventional instrumental sounds and atypical and complex structures that create intricate relationships between individual parts and the whole composition. Characteristic of her work are changing perspectives and scale, fragmentation, examination, and high emotional intensity.

Czernowin’s works have been performed at festivals throughout the world and include commissions by major ensembles and orchestras. She is the recipient of a Fromm Foundation Award, the Rockefeller Foundation Prize, a Guggenheim Fellowship, the composer’s prize of Siemens Foundation, and other awards.

Currently the Walter Bigelow Rosen Professor of Music at Harvard University, from 2006 to 2009 Czernowin was the first female composition professor at the University of Music and Performing Arts in Vienna. Previously, she was professor of music composition at the University of California, San Diego. She has held guest professorships and given presentations and master classes at institutions in Germany, Japan, Korea, Sweden, Finland, France, England, and across the United States.