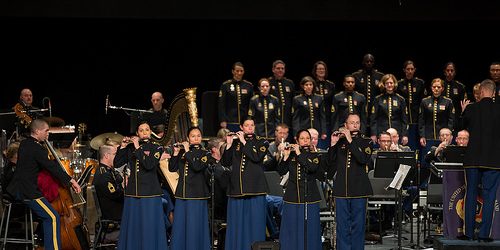 For some members of the United States Army Field Band, the group’s Sunday, March 23, concert at the Eastman School of Music will be a homecoming performance at their alma mater.  In addition, a dozen current Eastman students will take to the stage during the free public performance, which starts at 2 p.m. in Kodak Hall at Eastman Theatre.

The internationally acclaimed Field Band travels thousands of miles each year throughout the nation and abroad. Along with the Soldiers’ Chorus, the Field Band presents a diverse program of marches, overtures, popular music, patriotic selections, and instrumental and vocal solos. The band’s members are selected by highly competitive auditions.

Mark Scatterday, professor and chair of conducting and ensembles at Eastman, will appear as guest conductor and will lead the Army band in a performance of Morton Gould’s “American Salute.” An ensemble of Eastman students representing instrumental studios from across the school will perform Sousa’s “El Capitan.”

The United States Army Field Band & Soldiers Chorus concert is presented by the City of Rochester and Eastman School of Music. Tickets are free and are available for pick-up in person at the Eastman Theatre Box Office, 433 East Main St. For online ticketing, visit www.armyfieldband.com/tickets .