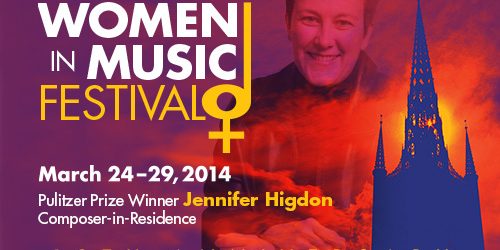 Pulitzer Prize winner Jennifer Higdon, one of America’s most frequently performed composers and a major figure in contemporary classical music, headlines this year’s Women in Music Festival at the Eastman School of Music March 24 to 29. As composer-in-residence, she will hold a master class and a forum with students, and her solo and chamber works will be featured in an “All-Higdon Concert” on March 28.

On March 29, the Greater Rochester’s Women’s Philharmonic will perform Higdon’s blue cathedral, a soaring symphonic work that has received more than 400 performances worldwide since its premiere in 2000.  The program also includes Rolande Falcinelli’s Marana Tha and the Concerto in Three Rhythms by Dana Suesse, known as “The Girl Gershwin” for such popular hits as “You Ought to Be in Pictures,” featuring pianist Tony Caramia, professor at the Eastman School of Music.

Guest artists for the festival, which is marking its 10th anniversary this year, include the Kaplan Duo, a piano duet composed of sisters Iris Kaplan Rosenthal and Nanette Kaplan Solomon, and violist Wendy Richman, a founding member of the International Contemporary Ensemble and doctoral degree student at Eastman.  The festival will conclude with an evening concert dedicated to the work of Canadian harpist and composer Caroline Lizotte, who will give the American premiere of her work Close for Couloir opus 48 with cellist Kathleen Murphy Kemp.

Festival events and concerts feature faculty and students from the Eastman School of Music and from the co-sponsoring institutions: Nazareth College of Rochester and SUNY Geneseo.  Events are free and open to the public and will be held daily throughout the week in various venues around Rochester. A schedule, background information, and venue directions are available on the Women in Music Festival website.

First held in 2005 to promote the contributions of women in composition, performance, education, scholarship, and administration, the Women in Music Festival has grown from a modest noontime concert series at Eastman to encompass daytime and evening performances across the region. The festival presents an average of 150 performers and the works of 35 composers, including Eastman students, each year.

“Our goal is to create a positive and inspiring event that focuses on the accomplishments of women in the entire field of music, and to give local audiences many convenient opportunities to celebrate Women’s History Month in music,” said festival founder and artistic director Sylvie Beaudette, assistant professor of chamber music and accompanying.

Higdon’s works represent a range of genres from orchestral to chamber and from choral and vocal to wind ensemble. The Washington Post described her as “a savvy, sensitive composer with a keen ear, an innate sense of form and a generous dash of pure esprit.”

Higdon received the 2010 Pulitzer Prize in Music for her Violin Concerto, with the committee citing Higdon’s work as a “deeply engaging piece that combines flowing lyricism with dazzling virtuosity.” She has also received awards from the Serge Koussevitzky Foundation, the Guggenheim Foundation, the American Academy of Arts & Letters, the Pew Fellowship in the Arts, the National Endowment for the Arts, and ASCAP.

A complete schedule can be found online at https://www.esm.rochester.edu/wmf/.