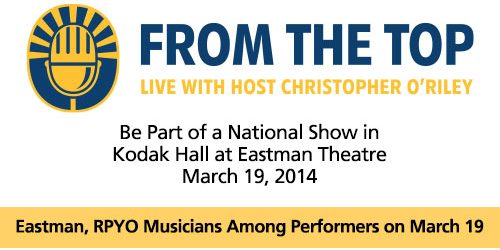 From the Top, the preeminent showcase for young musicians heard weekly on WXXI-FM 91.5, comes to Kodak Hall at Eastman Theatre to tape a radio broadcast on March 19 at 7 p.m.. The popular NPR program hosted by acclaimed pianist Christopher O’Riley will feature the amazing performances and captivating personal stories of extraordinary young classical musicians from across the country. This episode will be presented by WXXI and Eastman School of Music (ESM).

The show will feature a special guest appearance by legendary flutist Sir James Galway and his wife, Lady Jeanne Galway.  Sir James will play the third and fourth movements of the Gounod Petite symphonie with an ensemble of young musicians from the Eastman School of Music and Rochester Philharmonic Youth Orchestra (RPYO). They are: oboe – June Kim (a senior at Eastman)and Gwen Healy (RPYO); clarinet – Dominic Giardino (a sophomore at Eastman and From the Top alum) and Jeffrey Guo (RPYO); bassoon – Quinn Delaney (a senior at Eastman and From the Top alum) and Maggie Bacon (RPYO); and horn –Russell Rybicki (BM December 2013) and freshman Nikolette LaBonte of Eastman.

In addition both Sir James and Lady Jeanne, a renowned flutist in her own right, will perform a special piece with From the Top host Christopher O’Riley for the live audience.

Two local young musicians will be featured as soloists in this show. Eastman School of Music sophomore Emily Helenbrook from Alexander, N.Y., will return to From the Top after appearing on Show 257 taped at the Chautauqua Institution in 2012. Sixteen-year-old Annie Jacobs-Perkins from Pittsford, principal cellist with the RPYO, will perform At the Fountain, Op. 20, No. 2, by Carl Davidoff.  Also on the show will be 10-year-old violinist Pierce Wang from Fremont, Calif., and 16-year-old pianist Carmen Knoll from Carlstadt, N.J., who is a recipient of From the Top’s Jack Kent Cooke Young Artist Award.

What began as a radio experiment in 2000 quickly became one of the fastest growing and most popular weekly classical music programs on public radio. Broadcast on nearly 250 stations nationwide to an audience of nearly 700,000 listeners, From the Top has been described by the Boston Globe as “an entertaining, accessible, and inspirational mix of outstanding musical performances, informal interviews, skits, and games, the show is a celebration of extraordinary musicians who happen to be teenagers leading fairly normal lives.”

Annually, From the Top‘s live tapings reach more than 20,000 live audience members of all ages across the United States. In conjunction with its national tour, through From the Top‘s Center for the Development of Arts Leaders, the Boston-based non-profit offers leadership training to young artists and conducts classroom and community programs leveraging the power of its performers as role models for younger students. In addition, From the Top and the Jack Kent Cooke Foundation award $10,000 scholarships to high achieving musicians with limited financial means. The program has invested more than $1.6 million in support for pre-college students since 2005. From the Top launched its Emmy Award-winning PBS television series From the Top at Carnegie Hall in 2007.

From the Top is an independent non-profit organization headquartered in Boston that celebrates the power of music in the hands of extraordinary young people: unleashing the potential of young musicians as leaders in the arts; trumpeting the role of music to impact and enrich lives; and inspiring and building new audiences with a deeper appreciation for classical music.

From the Top‘s radio program is made possible through grants from the National Endowment for the Arts and the Jack Kent Cooke Foundation, and corporate underwriting from U.S. Trust, Bank of America Private Wealth Management. It is also supported through the generous contributions of individuals and institutions as well as public radio stations.  From the Top‘s founding partners are New England Conservatory and WGBH. Learn more at www.fromthetop.org.

WXXI is the essential, life-long educational media resource for the Greater Rochester area. WXXI puts the community first with programming that stimulates and expands thought, inspires the spirit, opens cultural horizons and promotes understanding of diverse community issues. The formal affiliation between WXXI and the Little Theatre, established in December 2011, enables the two organizations to work more efficiently by pooling resources and strengths in a number of areas including back-office operation and improved fundraising capabilities.  Log on to wxxi.org for more information about our services and programs.

The Eastman School of Music ranks among the nation’s premier music schools, boasting Guggenheim Fellows and Grammy and ASCAP Award winners on its distinguished faculty. The school has been commended and recognized nationwide for giving its students an intensive professional education, entrepreneurial opportunities in their musical disciplines, and the experience of a broader liberal arts education within the University of Rochester. Eastman’s prominent alumni include opera singers Renée Fleming, Anthony Dean Griffey, Joyce Castle, and the late William Warfield; jazz musicians Ron Carter, Steve Gadd, and Chuck Mangione; composer-conductor Maria Schneider; and composers Dominick Argento, Charles Strouse, Michael Torke, and Jeff Beal. The School presents more than 700 public concerts a year and hosts a variety of prestigious festivals and events, including, most recently, the International Society of Bassists Convention and the Xerox Rochester International Jazz Festival.