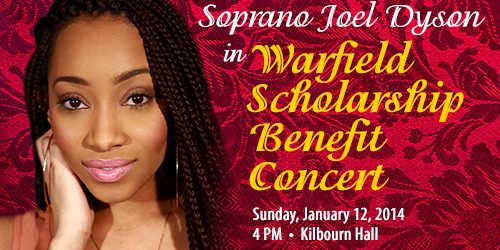 “William Warfield: A Legacy in Music,” an annual concert that continues the legacy of late opera singer William Warfield and supports the William Warfield Scholarship Fund, will be held in the Eastman School of Music’s Kilbourn Hall on Sunday, Jan. 12, at 4 p.m.  Soprano Joel Dyson, who was the scholarship recipient both last year and this year, will be featured on the program.

The William Warfield Scholarship Fund was formed in 1977 to provide financial aid to talented and deserving voice students who attend the Eastman School of Music.  Past recipients have included the first recipient, baritone Derrick Smith, who has performed in operatic roles and as a concert soloist in the United States, Brazil, and Europe; soprano Nicole Cabell, who in 2005 won the BBC Cardiff Singer of the World competition, one of the music world’s highest-profile competitions; and bass-baritone Jamal Moore, who was featured with the University of Rochester a cappella ensemble The Yellowjackets on the NBC competition The Sing-Off in 2011.

“I am very honored to be chosen again to receive this scholarship. I work tirelessly to make the William Warfield family and donors proud to have me as the recipient,” said Dyson, a senior at Eastman who performs at churches and organizations that support the scholarship and mentors and teaches students in the Rochester community.

A student of Professor of Voice Robert McIver, Dyson has received freshman, sophomore, and junior jury awards and the School’s Ornest Award, presented to a voice student for excellence in musical and academic studies. In her sophomore year, she was one of seven vocal students chosen to represent Eastman in the prestigious Conservatory Project at the John F. Kennedy Center for the Performing Arts in Washington, D.C.  She was Dorinda in Eastman Opera Theatre’s production of Handel’s Orlando in January 2013, and will portray Sister Constance in Dialogues of the Carmelites in April 2014.

In addition, audience members will hear a recording of William’s Warfield’s Nov. 18, 1942, recital, in which he performed works by Monteverdi, Mazzaferrata, and Bach, and will see a video presentation titled “Remembering William Warfield . . .”