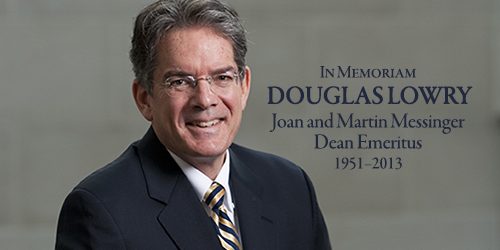 Douglas Lowry, the Joan and Martin Messinger Dean Emeritus of the Eastman School of Music at the University of Rochester, died Wednesday, Oct. 2.  A composer, conductor, and academic leader who was keenly attuned to the shifting music world and its challenges for music schools and students, he was 62. 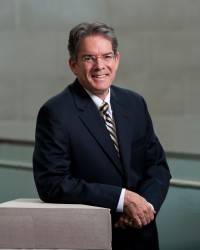 “Doug was a remarkable University leader.  He brought together the Eastman School community in ways that were deeply appreciated by its faculty, staff, students, alumni, and friends,” said University of Rochester President Joel Seligman.  “He was the leader during whose watch the School renovated and expanded Eastman Theatre.  Inspiring new faculty were hired. Doug was a national presence in music education and an individual whose charm, wit, and intelligence inspired generations of students and colleagues.”

Dean Lowry  became the sixth head of the Eastman School in 2007. He was named the first Joan and Martin Messinger Dean in 2011 and was reappointed in May 2013. Diagnosed with multiple myeloma in September, 2011, he resigned for health reasons on Sept. 23, 2013. Following his resignation announcement, the University of Rochester Board of Trustees named him the Joan and Martin Messinger Dean Emeritus and awarded him an honorary doctor of music degree.

Dean Lowry was known for building strategic partnerships locally, nationally, and internationally, and for recruiting important faculty artists. He oversaw the launch of several new initiatives, including the expansion of Eastman’s international partnerships in China and Europe, focusing on the use of Internet2 technology to create a series of “virtual partnerships” with prestigious institutions worldwide. He founded the Center for Music Innovation and Engagement, under Eastman’s Institute for Music Leadership, as an incubator for new forms of music presentation.  The Paul R. Judy Center for Applied Research, founded this year and focused on researching and creating models for alternative ensembles, reflects Dean Lowry’s incisive appraisal of the rapidly changing landscape of the music world.

Dean Lowry led the biggest architectural transformation in the Eastman School’s history. Under his leadership, the School’s historic performance venue was renovated as Kodak Hall at Eastman Theatre, and the new Eastman East Wing, with state-of-the-art performance, rehearsal, and teaching spaces, was built. The renovation and expansion project was completed in December 2010.

Committed to raising the profile of Eastman with events and special programs around the country, he re-entered the school into the marketplace of New York City, most notably with the appearance of the Eastman Virtuosi at Merkin Concert Hall and the Eastman Chamber Jazz Ensemble at St. Peter’s Church.

“Doug Lowry not only enjoyed a remarkable career, he lived a wonderful life,” said Eastman School of Music Dean Jamal Rossi. “While he was active as a composer, conductor, author, poet, performer, and academic leader, I believe his real passion was people.  Doug simply loved the community of individuals with whom he worked and interacted.”

Dean Lowry’s compositional premieres and other musical work took him to venues throughout the United States and Asia as a guest conductor and clinician for orchestras and wind ensembles. His “Geo,” commissioned and premiered by Christopher Seaman and the Rochester Philharmonic Orchestra, opened Kodak Hall at Eastman Theatre in October of 2009. He wrote incidental music for productions at the Cincinnati Playhouse and St. Louis Repertory Theatre and for a variety of other media. His works have been performed by the Cincinnati Symphony, the Louisville Orchestra, the Chattanooga Symphony, the Tucson Symphony Orchestra, the Starling Chamber Orchestra, the Eastman School Symphony Orchestra, the Flora Thornton School of Music at the University of Southern California, and others.

Most recently, February 2013 saw the premieres of “The Freedom Zephyr,” his ode to the Underground Railroad, by the Rochester Philharmonic Orchestra, and of “Wind Religion” by the Eastman Wind Ensemble.

Dean Lowry’s “Suburban Measures” for trumpet and organ was recorded on the BIS label by Anthony Plog and Hans Ola-Erikkson, organ. His “Blue Mazda,” a cabaret song cycle for soprano, trumpets, piano, and percussion, was recorded on the Summit label with the Freiburg Trumpet Ensemble and soprano Maria Cecilia Bengtssohn. He has composed for Music from Angel Fire and other distinguished chamber music organizations.

Before coming to the Eastman School in 2007, Dean Lowry was dean and the Thomas James Kelly Professor of Music at the University of Cincinnati College-Conservatory of Music. During his seven-year tenure there, he started initiatives to engage communities in the arts, including joint master classes and concerts with the Cincinnati Symphony Orchestra. He strengthened the conservatory’s presence at the Opera Theatre and Music Festival of Lucca, Italy, where he also coached and conducted.  He also co-hosted WVXU’s “Around Cincinnati,” a radio program on art and entertainment in the region.

Previously, Dean Lowry was associate dean of the Thornton School of Music, where he served in various teaching and academic leadership positions beginning in 1983.

Throughout his career, Dean Lowry served on the boards of numerous community and music organizations, including the National Association of Schools of Music, the American Classical Music Hall of Fame, the Rochester Philharmonic Orchestra, the Cincinnati Symphony Orchestra, Cincinnati Opera, and Cincinnati School for the Creative and Performing Arts.

Dean Lowry is survived by his beloved wife, Marcia, daughters Melanie and Jennifer, and son Timothy; his brothers, John Lowry and William Lowry; his sister, Susanne Carter. He was predeceased by his parents, John and Mildred. A memorial event is being planned and will be announced. Memorial gifts may be directed to the Douglas Lowry Fund for Musical Excellence to support Dean Lowry’s vision and the mission of the Eastman School of Music: