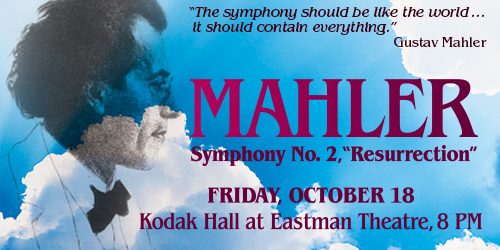 The Eastman School of Music’s Philharmonia and Eastman Rochester Chorus will perform Gustav Mahler’s astonishing Symphony No. 2, “The Resurrection,” on Friday, Oct. 18, under conductor Neil Varon. The concert will begin at 8 p.m. in Kodak Hall at Eastman Theatre and will be dedicated to the memory of Joan and Messinger Dean Emeritus Douglas Lowry.

Almost 300 instrumentalists and choral members will unite to present this work of epic proportions. Two Eastman seniors, Kimberly Merrill, soprano, and Melissa Zgouridi, mezzo-soprano, will be featured soloists in this performance.

“The Resurrection” is one of Mahler’s largest works in terms of forces, length, and harmonic boldness. Mahler originally composed the first movement of his second symphony as a stand-alone symphonic poem, titled “Todtenfeier,” or “Funeral Rites.” According to Mahler’s personal notes, this piece poses a series of questions on the meaning of life and death, which he sought to answer in a larger work. This prospect spawned his composition of the following four movements, which together form “The Resurrection.”

The second movement of the symphony is a gentle folk-minuet that seems unrelated to the prior movement. However, two interrupting dark moments suggest the presence of death even in life’s happiest moments. Mahler’s song “St. Anthony of Padua’s Sermon to the Fishes,” based on a text from Des Knaben Wunderhorn (The Boy’s Magic Horn), serves as the basis for the third movement. The music demonstrates the superficial sentiments and artificial happiness of humans.

In the final two movements, Mahler introduces prayer and ultimate hope by adding the human voice. The fourth movement is an intimate plea in which the mezzo-soprano soloist demonstrates how the power of faith can supersede cynicism and be a solace from worldly tumult. Mahler provides an assurance of faith and redemption in the final movement, when instrumentalists, soloists, and choral singers join to both accept and celebrate life after death.

This concert is free and open to the public.