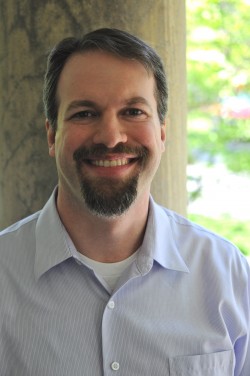 John Fetter, Assistant Professor of Music Education at the Eastman School of Music, has been named a recipient of Rochester Education Foundation’s Making a Difference Award.

Fetter is being honored for his work with the Urban Strings program, a partnership between the Eastman School of Music and the Rochester City School District. This program provides private or small group lessons to string students in grades three through seven at Enrico Fermi School No. 17. Last year, Fetter received the University of Rochester Presidential Diversity Award for his efforts with the same program.

As an advocate, leader, and coordinator of the Urban Strings program, Fetter organizes and coaches current Eastman music education and performance majors who serve as teachers. Fetter has been an integral force for the Urban Strings program since he was student at the Eastman School of Music.  At Eastman, Fetter earned a Master of Music degree in 2006, and a Doctor of Philosophy degree in 2011.

Fetter’s presence in the Rochester community extends beyond his involvement with the music education program at Eastman and the Urban Strings initiative. He currently serves as director of the Philharmonia and Sinfonia Youth Orchestras for the Hochstein School of Music and Dance and also as collegiate instructor in violin for the Eastman Community Music School. Additionally, Fetter directs String Jam: Alternative Styles for Orchestra, a summer camp at the Hochstein School that exposes young string players to diverse styles of music.

The Rochester Education Foundation Awards for school volunteers, businesses, educators, and those who make a difference will be presented at the organization’s annual Partnership Awards Dinner on October 9. Fetter will be presented with this award alongside five other prominent honorees who have positively impacted the Rochester community.