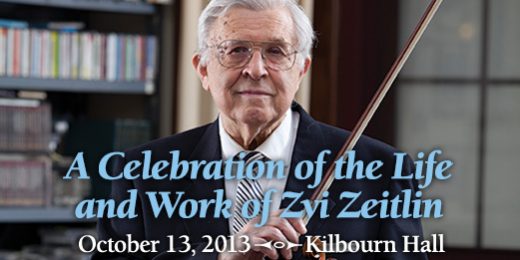 The Eastman School of Music will celebrate the life and work of its legendary violinist Zvi Zeitlin on Sunday, Oct. 13, at 3 p.m. in Kilbourn Hall with a concert featuring an array of colleagues and friends, including pianists Jerome Lowenthal and Anna Gourfinkel, and violinists Charles Castleman, Mikhail Kopelman, and Dylan Kennedy.

The event will also feature a short video retrospective of Professor Zeitlin conducting several master classes at Music Academy of the West, where he taught in the summer program. Speakers will include Jamal Rossi, Dean of the Eastman School of Music; Professor Zeitlin’s daughter and son, Leora and Hillel Zeitlin; and Robert W. Weinman, a board member of the Music Academy of the West.

The concert program includes Eugene Ysayë’s Ballade in D Minor, “For George Enescu,” performed by Castleman, and George Rochberg’s “Nocturne,” “Arabesque,” and “Toccata-Rag,” performed by Lowenthal. Lowenthal will be joined by Kennedy for Antonin Dvoràk’s Romance in F Minor. Kennedy, a sophomore at the Cleveland Institute of Music, studied with Zeitlin from early youth and he was the last student to see him before his death.  Kopelman and Gourfinkel are scheduled to perform Ernest Block’s “Nigun (Improvisation)” from Baal Shem and Brahms’s Scherzo.

Professor Zeitlin died on May 2, 2012, five days after completing his last year of full-time teaching at Eastman.  He was 90 years old.

From 1933, when he became the youngest student ever to win a full scholarship at the Juilliard School of Music at the age of 11, to his gala farewell recital in Kilbourn Hall in 2012, two days shy of his 90th birthday, Professor Zeitlin devoted his entire life to music — performing and teaching all over the world.  His dedication to his students was such that he never took a sabbatical in all his 45 years (1967-2012) at Eastman.

For most of those years, the violinist called Room 309 at the Eastman School of Music his musical home. Posters from performances around the world hung on the walls alongside pictures and greetings from his students and numerous luminaries with whom he played, including Igor Stravinsky, Pablo Casals, Aaron Copland, Leonard Bernstein, Serge Koussevitzky, Itzhak Perlman, Jascha Heifetz, and many others.

To commemorate his tenure there, one of the longest in its history, the Eastman School will dedicate Room 309 as the Zvi Zeitlin Studio.  A case has been installed on the wall outside the studio and will feature periodically changing exhibits on periods in the violinist’s life and career. The materials will be culled from his extensive archives of photos, music, programs and other memorabilia, which have been donated to the Special Collections at Eastman’s Sibley Library. The announcement of this major gift to Eastman, and some of the items included, will also be made at the memorial concert.

In addition, during the month of October, the Sibley Music Library will have an exhibit focusing on Professor Zeitlin’s faculty service at Eastman, his students, and his faculty recitals.

According to his colleagues and students, the essence of what mattered most to Professor Zeitlin can be summed up simply as the celebration, elevation, and illumination of the human spirit through music, to all who listen and all who come to learn. Generations of his students, musicians from around the world, colleagues from Eastman and the University of Rochester, family, friends, and music-lovers will gather on October 13 to continue and pay tribute to his legacy.

“A Celebration of the Life and Work of Zvi Zeitlin” is free and open to the public. A reception on the School’s Cominsky Promenade will be held following the concert.