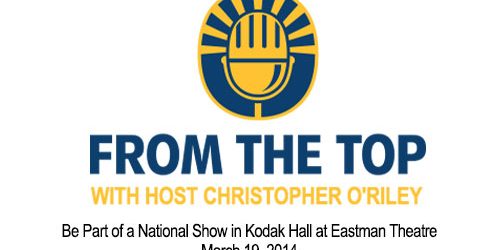 Rochester, N.Y.> – The National Public Radio program that The Washington Post describes as “giving teenagers the chance to show their musical chops while demonstrating that they’re funny and cool” returns to Rochester to tape an upcoming episode. WXXI and the Eastman School of Music bring From the Top to town on March 19th and invite young musicians from the Rochester area to apply to be part of the show. From the Top first came to Rochester in 2008, when the program was recorded at Nazareth College and featured performances by five local musicians.

Hosted by internationally renowned pianist Christopher O’Riley, the show will record at Kodak Hall at Eastman Theatre and will feature young musicians from across the country, along with eligible applicants from the Greater Rochester area.

Area teens, who are Classical instrumentalists, vocalists, and composers between the ages of 8 and 18, are encouraged to apply for the chance to perform on From the Top. Visit WXXI.org/fromthetop for complete details and to download a submission form. Applications must be submitted by December in order to be considered for the March show. From the Top producers are also looking for Eastman School of Music alumni who may have performed on From the Top in the past.  Individuals should contact Helene Snihur at hsnihur@esm.rochester.edu. Information about tickets for the From the Top show at Kodak Hall on Wednesday, March 19, 2014 at 7 p.m. will be available soon.

From the Top features the stories and musical performances of America’s outstanding young classical musicians. Each one-hour program features performances by five soloists or ensembles ages 8-18 who are often accompanied by host Christopher O’Riley. From the Top is heard on WXXI-FM 91.5/WXXY-FM 90.3/WXXI-FM HD on Sundays at 5 p.m. and on more than 250 stations coast to coast. The series is produced in association with WGBH Radio Boston and New England Conservatory, its home and educational partner, and is sponsored by UBS and distributed by NPR. Support comes from the National Endowment for the Arts and the Jack Kent Cooke Foundation, as well as from radio stations, corporations, foundations, and individuals. From the Top is endorsed by the National Guild of Community Schools of the Arts, the National Association for Music Education, the American Symphony Orchestra League, and the Music Teachers National Association.

About WXXI:
WXXI is the essential, life-long educational media resource for the Greater Rochester area. WXXI puts the community first with programming that stimulates and expands thought, inspires the spirit, opens cultural horizons and promotes understanding of diverse community issues. The formal affiliation between WXXI and the Little Theatre, established in December 2011, enables the two organizations to work more efficiently by pooling resources and strengths in a number of areas including back-office operation and improved fundraising capabilities.  Log on to wxxi.org for more information about our services and programs.

The Eastman School of Music ranks among the nation’s premier music schools, boasting Guggenheim Fellows and Grammy and ASCAP Award winners on its distinguished faculty. The school has been commended and recognized nationwide for giving its students an intensive professional education, entrepreneurial opportunities in their musical disciplines, and the experience of a broader liberal arts education within the University of Rochester. Eastman’s prominent alumni include opera singers Renée Fleming, Anthony Dean Griffey, Joyce Castle, and the late William Warfield; jazz musicians Ron Carter, Steve Gadd, and Chuck Mangione; composer-conductor Maria Schneider; and composers Dominick Argento, Charles Strouse, Michael Torke, and Jeff Beal. The School presents more than 700 public concerts a year and hosts a variety of prestigious festivals and events, including, most recently, the International Society of Bassists Convention and the Xerox Rochester International Jazz Festival.