Pianos Give Peace a Chance 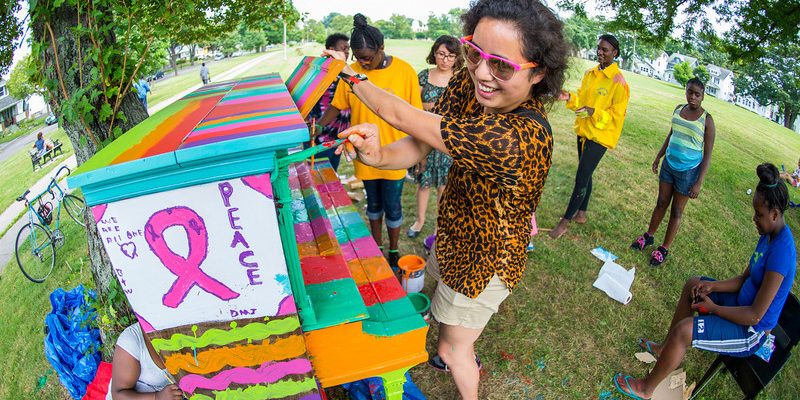 Conductor Leonard Bernstein, reacting to the assassination of President John F. Kennedy, said in 1963, “This will be our reply to violence: to make music more intensely, more beautifully, more devotedly than ever before.”

Fifty years later, within the city of Rochester, N.Y., a project is using music as a tool to move toward a more peaceful community. The effort is bringing together neighbors, volunteers, artists, performers, and passersby to interact with each other and seemingly randomly placed pianos in public places. University of Rochester and Eastman School of Music senior Marissa Balonon-Rosen is leading “Pianos for Peace,” a two-fold project that brings music and art to neighborhoods, employing pianos as a catalyst for discussion and community building.

“Many people in Rochester can’t afford instruments or music lessons,” explained Balonon-Rosen, a graduate of the Rochester city schools. “It is often neighborhoods with the most violence that don’t have access to music and other arts. This project will make those resources available to them, and by actively involving people in music, we can make for a more peaceful community.”

The donated upright and baby grand pianos give anyone the opportunity to walk up to and play an instrument or hear someone else play. A recent YouTube video showed a Rochester neighborhood police officer performing an impromptu recital. Activities such as performances, talks, and free lessons will offer additional occasions for community interaction. At the same time, Balonon-Rosen hopes, residents will bring up their own ideas to make the world more peaceful.

“Often people have ideas about dealing with issues that affect them, but they may not have a platform or may be afraid to speak,” said Balonon-Rosen. “Music is a tool that empowers people through creative expression. This project will give a voice to the youth and people in these neighborhoods to come together and talk.”

Currently in eight locations around Rochester, with more to come, the pianos are painted with peace themes by volunteers and community organizations and watched over by “Piano Buddies” who cover them in inclement weather.  Balonon-Rosen also secured many donations of materials and services such as piano moving and paint for the project.

The pianos will remain in their various community locations until the end of August, when they will be moved to the M.K. Gandhi Institute for Nonviolence in Rochester, one of the project sponsors. The relocated instruments will create a “Piano Park for Peace,” with additional concerts and programs about nonviolence. At the end of September, those pianos will be donated to various youth and peace-promoting organizations.

“The ‘Pianos for Peace’ project will connect hundreds of people with a sense of community, hope, play and inspiration in neighborhoods that often experience very little of these qualities, especially because of budget cuts,” said Kit Miller, director of the Gandhi Institute.  “We are delighted that all of the pianos will meet here in the Gandhi Garden for the month of September for more programming for the surrounding neighborhood, returning university students, and others.”

The calming power of music was evident internationally in June during protests against the Turkish government, when German musician Davide Martello set up and played his grand piano near demonstrators in an Istanbul park. His concert, part of his own personal world tour, attracted some 1,500 people including, according to the New York Times, police officers who “joined the audience, resting on their riot shields.”