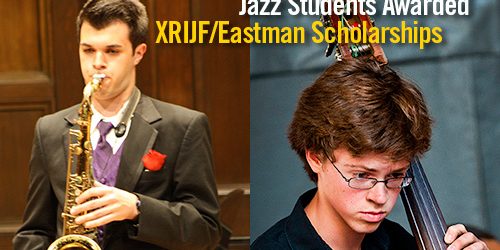 Double bassist Ryder Eaton and saxophonist C.J. Ziarniak have been named the recipients of this year’s Xerox Rochester International Jazz Festival/Eastman School of Music Scholarships.  They will both start their college studies at Eastman this fall as freshman in the Department of Jazz Studies and Contemporary Media.

The two musicians, who are graduates of the Eastman Community Music School (ECMS), will be recognized on Monday, June 24, during the annual scholarship performance at 7:30 p.m. in Kodak Hall at Eastman Theatre. Opening the show is the Eastman Youth Jazz Orchestra, led by Eastman Community Music School Director Howard Potter. They’ll be followed by the Eastman Jazz Ensemble directed by Bill Dobbins with special guest artist Mike Brignola, a 1979 graduate of the University of Rochester’s Eastman School, on baritone sax.  Brignola has played in the touring big band of Woody Herman since 1980. The concert is free but donations for the scholarship fund are welcome.

The scholarship program is sponsored by Xerox Rochester International Jazz Festival producers Marc Iacona and John Nugent and funded by proceeds from the Festival.

“We are proud to have provided more than $125,000 for more than 30 scholarships since the fund was established in 2002,” said Iacona. “Our commitment to helping talented local youth further their education and create opportunities for the next generation of musicians to perform in the festival alongside some of the finest musicians in the world, is an important part of our mission. It is rewarding to see these talented young people go on to great success in their field.”

Said Potter, “The faculty of the Eastman Community Music School are fortunate to get to work with students as dedicated, focused and talented at C.J. and Ryder. They each have a level of artistic sophistication, which is well beyond their years. Their improvisations are immediately identifiable as having the most elusive of all jazz qualities: swing, phrasing, and groove. We are thrilled to see them go on to Eastman and know that they are in for an experience of a life-time!”

Eaton is graduating this month from the Rochester City School District’s School of the Arts, where he was an instrumental major and performed in the school’s orchestra, senior high jazz ensemble, jazz combo, and wind ensemble. He was introduced formally to music in kindergarten while attending Children’s School of Rochester (School #15), later studying alto saxophone and snare drum and taking private lessons in guitar and electric bass. He also studied at Garth Fagan School of Dance between the ages of 7 and 14.

During his sophomore year at School of the Arts, Eaton entered the Eastman Community Music School’s Eastman Pathways program for Rochester City School District students, beginning classical lessons on the upright bass.  He also played in ECMS ensembles, include Saxology, Latin Jazz, and the Eastman Youth Jazz Orchestra. In addition, Eaton spent a summer studying Mandarin in Beijing, China, and enjoys skateboarding, skiing, drawing, and dancing. He is the son of Martha O’Connor and Daniel Eaton.

Ziarniak, who will also be studying music education, began playing saxophone in the fourth grade. He is graduating this month from Aquinas Institute of Rochester, where he was a member of the Concert Band, Jazz Ensemble, Pep Band, and Pit Orchestra. He was selected to perform with the 2012 Rochester Music Hall of Fame All-Star High School Jazz Ensemble and was featured on the WROC TV Scholastic Arts Spotlight Award program. Ziarniak has also been selected for the Monroe County Junior and Senior High Concert Bands and the Monroe County Jazz Ensemble and was an alternate for the NYSSMA All-State Instrument Jazz Ensemble.

At Eastman Community Music School, Ziarniak studied jazz improvisation, performed with the Eastman Youth Jazz Orchestra and Saxology, and attended summer jazz studies programs at Eastman and the Litchfield Summer Jazz Camp in Connecticut. He is an active member of the Nativity of the Blessed Virgin Mary Church in Brockport and works part-time at the Rochester Museum and Science Center. He is the son of Conrad and Mary Ziarniak.

Two former ESM/XRIJF scholarship winners are performing on this year’s festival. Trumpeter Mike Cottone and his quartet appear at the Rochester Club at 6 and 10 p.m. on Monday, June 24, while jazz saxophonist Karl Stabnau will be at the Central Library of Rochester and Monroe County at noon on Friday, June 28.

Xerox Rochester International Jazz Festival-goers will also be able to catch other past award recipients perform during the ESM-XRIJF Jazz Scholarship Alumni Combo performance on the Jazz Street Stage at 6 p.m. Wednesday, June 26. The entire schedule of concerts is at rochesterjazz.com .