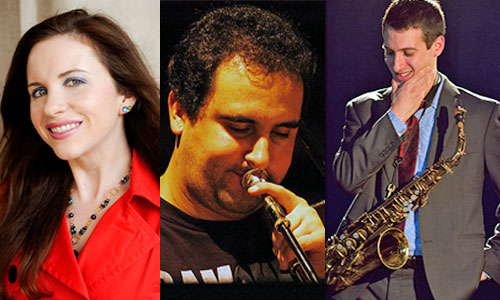 Bellor is graduating this month with a Ph.D. in music composition. Her winning piece “Midnight Swim” is a 10-minute big band work which features a soprano saxophone solo. The piece was premiered in April 2012 in Kilbourn Hall by the Eastman New Jazz Ensemble under the direction of Dave Rivello, with Colin Gordon as the featured soloist.

Following Commencement, Bellor will be composing a 20-minute opera, commissioned by the Washington National Opera American Opera Initiative, for a fall premiere at the Kennedy Center.  In June, she will be participating in the Jazz Composers Orchestra Institute readings in New York City, where her new orchestra piece “Crystal Skies” will be played by the American Composers Orchestra. She will also continue her faculty position as Lecturer in Music Theory at Nazareth College in the fall.

Perfeito, a trombonist and a native of Portugal, is pursuing a Doctor of Musical Arts degree in the Jazz & Contemporary Media department. DownBeat recognized him for his group’s performance of Portuguese composer Carlos Azevedo’s “2-4” and of his own composition “Wander Lust” at his degree recital in November 2012.

After receiving his Bachelor of Music degree from Berklee College of Music in 2001, Perfeito taught jazz at ESMAE, a college-level performing arts institution in his hometown of Porto, Portugal, before returning to the United States and earning his Master of Music degree from the New England Conservatory in 2007.

Schwartz is graduating this month with his Master of Music degree in jazz composition. His jazz soloist award from DownBeat recognized his performance of Victor Young’s “Stella by Starlight,” as arranged by Bill Holman, with the Eastman Jazz Ensemble in December 2012 in Kodak Hall. The arrangement contains both a ballad and up-tempo portion.

Schwartz’s arrangement of Bill Evans’ “The Two Lonely People,” which earned him his second DownBeat award, was his first arrangement for an ensemble larger than standard big band instrumentation. The eight-and-a-half-minute arrangement was recorded by the Eastman Studio Orchestra, which combines the typical big band with a string section, harp, percussion, and extra woodwinds.

In addition, Schwartz also nets a DownBeat award as a member of Paulo Perfeito’s Eastman 6tet.

Originally from East Northport, N.Y., Schwartz received his bachelor’s degree at Eastman in jazz saxophone performance in 2011. Following Commencement this month, he will move to New York City to work as a freelance performer/composer/arranger.

The Student Music Awards were announced in the June issue of DownBeat, one of the country’s most respected jazz magazines and often called “the bible of jazz.” Entries for the annual Student Music Awards are judged on musicianship, creativity, improvisation, technique, sound quality and balance, excitement, authority, and other criteria. The judges include editors of DownBeat, professional musicians, and educators.