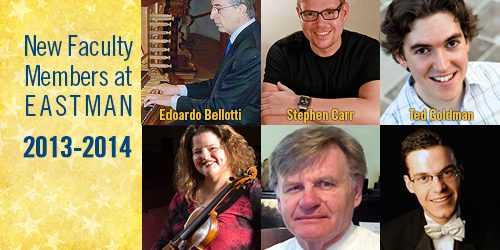 The Eastman School of Music has announced the appointment of six distinguished performers and scholars who will join its faculty beginning in the 2013-2014 year:

Edoardo Bellotti ,Associate Professor of Organ, Harpsichord and Improvisation. Bellotti has been Professor of Organ, Harpsichord and Improvisation in several musical institutions and universities including the Conservatory of Trossingen and the University of Bremen in Germany, and the University of Udine and the Conservatory of Trento in Italy. A virtuoso organist and renowned improviser, he performs at leading festivals and concert venues throughout the world. Bellotti is currently collaborating in a project of new organ music and visual art in Milan, in conjunction with the art installation of the American minimalist Dan Flavin. Belloti  has performed the complete works of César Franck, and has worked with orchestras in Italy and abroad, performing a wide spectrum of repertoire, including the Italian premiere of Satyagraha by Philip Glass. He is also considered a leading expert in the performance of renaissance and baroque keyboard music. He combines his international performing career with musicological research and teaching, publishing articles as well as new critical editions of music of the 17th and 18th centuries. Bellotti is a frequent guest lecturer at international conferences. He has made several critically acclaimed recordings on historical instruments, including Promenade (Loft Recordings), a recording of organ repertoire and original improvisations on Eastman’s Italian baroque organ at the Memorial Art Gallery.

Stephen Carr, Assistant Professor of Opera. Carr’s work in the world of opera, musical theatre, and operetta has taken him across the United States, Europe, and Asia. He received a BM in Voice Performance and an MM in Stage Directing at Eastman. He earned two additional post-graduate degrees in Musical Theatre in London at the Royal Academy of Music. At the invitation of Plácido Domingo, he trained as a stage director with the Washington National Opera’s Domingo-Cafritz Young Artist Program. A member of Actor’s Equity, Carr’s performance credits include productions of Ragtime, Cabaret (Jack Lyons Theatre, London), Jesus Christ Superstar (European tour), and The Scarlet Pimpernel, as well as recent cabaret and concert hall performances throughout the Tokyo metropolitan area. He can be heard on recordings for the Newport Classics label.  Carr’s work as a stage director has encompassed nearly all genres of lyric theatre, from grand opera to Broadway musicals, with companies including Palm Beach Opera, Washington National Opera, Mercury Opera Rochester, Opera North, Ohio Light Opera, Center City Opera of Philadelphia, and Eastman Opera Theatre. His recent productions include Japanese translations of Company, Thoroughly Modern Millie, and Little Shop of Horrors. Carr has served on the faculties of the Interlochen Summer Arts Institute and of Japan’s Senzoku Gakuen College of Music, where he helped to build one of the few successful undergraduate musical theatre programs in Asia.

Ted Goldman, Assistant Professor of Music Theory. Goldman is a composer, music theorist, performer, educator, and inter-disciplinary collaborator. He began his undergraduate studies in physics and graduated summa cum laude with honors in music from Columbia University. He received his MM and DMA in composition from The Juilliard School. Goldman’s compositions have received national and international recognition, including two ASCAP Morton Gould Young Composer Awards. His composition Scrudge was selected for the PARMA Recordings Anthology of Contemporary Music, digidigidha received the Society for New Music’s Brian M. Israel Prize, Cellular Automata won eighth blackbird’s MusicX Festival competition in Switzerland, Tynexia was a winner of the Beijing Modern Music Festival’s Young Composers Project, and A Fitful Sleep received the Hanson Young Composers Award, sponsored by Chamber Music Rochester and the Eastman School of Music.  Goldman has been commissioned by Alarm Will Sound, the Banff Centre in Canada, The Norfolk New Music Festival, the Contrasts Quartet, and twice by the New Juilliard Ensemble. For five years he was a radio host at WKCR-FM NY, where he discussed music both new and old.  At Juilliard, Goldman was a member of the Music and Medicine Initiative, a collaboration between Juilliard and Cornell University. As a pianist, Goldman has performed at the Bowdoin International Music Festival, The Mannes International Keyboard Institute, and the Mannes Beethoven Institute.

Renée Jolles, Associate Professor of Violin. Jolles enjoys an eclectic career as soloist and chamber artist specializing in a wide variety of styles from Baroque to contemporary. Hailed as a “real star” by The New York Times for her New York Concerto debut in Alice Tully Hall, she has premiered hundreds of works, including the American premiere of Schnittke’s Violin Concerto No. 2. Her concerto engagements have included orchestras such as Orpheus Chamber Orchestra, The Philharmonic Orchestra of New Jersey, The Cape May Festival Orchestra, and The Salisbury Symphony.  Jolles is a member of the Jolles Duo (harp and violin), Continuum, Intimate Voices, The New York Chamber Ensemble, and is a concertmaster of the world-renowned, Grammy Award-winning, conductorless Orpheus Chamber Orchestra. She has performed at festivals such as Marlboro, Cape May, Bowdoin International Music Festival, Rockport (Mass.), Norfolk, Taos, Riverrun, and The Chamber Music and Composers’ Forum of the East. Committed to recording new music, she can be heard as soloist and chamber artist on the Cambria, CRI, North/South Recordings, Albany, and New World record labels. Jolles has served on the faculty of The Juilliard School, Pre-College Division, The Mannes School of Music, Preparatory Division, Hoff-Barthelson Music School, and The Aaron Copland School of Music at Queens College. During the summer, she is on the faculty at the Bowdoin International Music Festival.  Jolles received her BM and MM degrees from Juilliard, where she received the school’s highest award, the William Schuman Prize.

Henry Klumpenhouwer, Professor of Music Theory. Klumpenhouwer is a graduate of the University of Alberta (BMus Composition, MMus Theory) and Harvard University (AM, PhD Music). He taught at the University of Alberta from 1991 to 2012.  Klumpenhouwer’s published work involves the analysis of atonal music, the history of music theory, and analytical methodology. His formulation that came to be known as the “Klumpenhouwer Network” led to “K‑net analysis” becoming a standard technique, discussed and developed by American and overseas theorists in many dozens of books, articles, and dissertations. His most recent work deals with harmonic dualism and with questions of form in Beethoven.  His publications have appeared in Intégral, Journal of Music Theory, Music Analysis, Music Theory Spectrum, Music Theory Online, Perspectives of New Music, Tijdschrift voor Muziektheorie, the Oxford Handbook of Neo‑Riemannian Music Theories, and elsewhere. Among his published essays contributing to his international impact as a historian of music theory are “Music Theory, Dialectics, and Post-Structuralism” (1997), “Late Capitalism, Late Marxism, and the Study of Music” (2001), and “Harmonic Dualism as a Structural and Historical Imperative” (2011). From 2007–2009, Klumpenhouwer was the editor of Music Theory Spectrum. He served as a faculty member at the Third and the Eleventh Mannes Institutes for Advanced Studies in Music Theory.

Nathan Laube, Assistant Professor of Organ. Laube has quickly earned a place among the organ world’s elite performers for his brilliant playing and creative programming of repertoire spanning five centuries. He was a featured performer at the 2009, 2011, and 2012 national conventions of the Organ Historical Society; the American Guild of Organists’ 2010 national convention in Washington, D.C.; and the Guild’s 2012 national convention in Nashville. He has performed with numerous orchestras, chamber ensembles, and choruses. Many of his live performances have been featured on American Public Media’s series Pipedreams. Laube has won top prizes at several distinguished competitions and currently is Artist-in-Residence at the American Cathedral of the Holy Trinity in Paris, France. He frequently serves on the faculty for Pipe Organ Encounters in the United States and has also taught at the Oberlin Summer Organ Academy in Ohio and at the Kimmel Center for the Performing Arts Summer Organ Academy in Philadelphia. As a recipient of a William Fulbright Grant, Laube spent the 2010-2011 academic year studying with Michel Bouvard and Jan Willem Jansen at the Conservatoire à Rayonnement Régional de Toulouse, where he earned Prix de Spécialisé and the Prix François Vidal from the city of Toulouse. He earned his BM at the Curtis Institute of Music, where received the Landis Award for Excellence in Academics and the Aldwell Award for Excellence in Musical Studies.