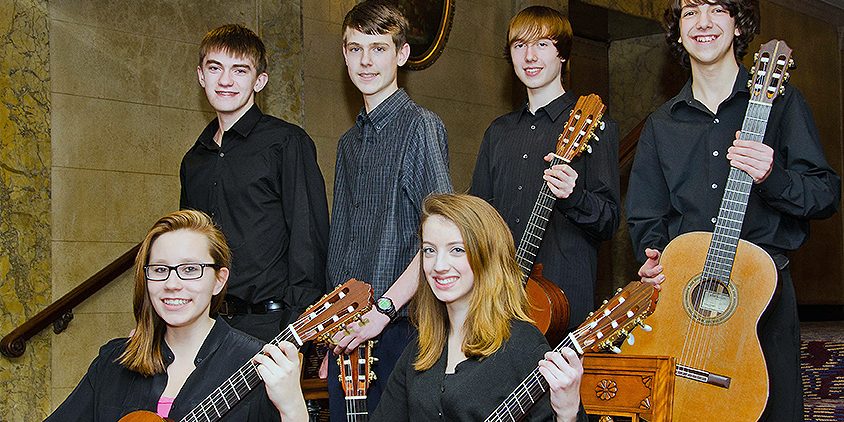 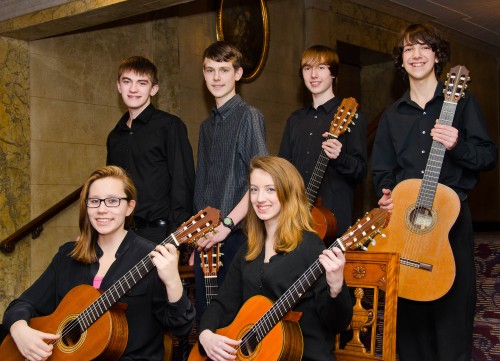 The Eastman Community Music School’s Guitar Program will celebrate its 20th anniversary with a concert featuring current students and teachers as well as alumni and former faculty at 7:30 p.m. on Friday, May 17, in Hatch Recital Hall. The event is free and open to the public.

Approximately 150 area students have studied in the program over the past two decades, which was launched by Eastman School of Music Professor of Guitar Nicholas Goluses. Almost 50 students, ranging in age from elementary school to adult, currently study guitar in the Community Music School.

“The guitar program boasts variety and quality,” said Peter Kodzas, co-chair of the Strings, Harp, and Guitar department in the Eastman Community Music School (ECMS).  “We have students of all ages from local school districts, as well as adult performers who are teachers, engineers, and medical doctors.

“Last year, our high school ensemble was the only pre-college ensemble selected to perform at the Guitar Foundation of America Convention. Student David Steinhardt won first prize in the 2012 Montreal Guitar Competition and in the 2013 American String Teachers Association National Competition,” said Kodzas, who is also ECMS Senior Instructor in Guitar and Assistant Professor of Chamber Music at Eastman.

In addition, Steinhardt and Annie Jacob Perkins won first prize in the chamber music division of the 2013 Rochester Virtuosi Competition sponsored by the Pittsford-based International School of Music and Arts. Kodzas also noted that former Eastman School of Music students who were teaching assistants in the ECMS guitar program have gone on to teach at the Western Australian Academy of Performing Arts, the International School of Music, Edith Cowan University, the Avalon Music Center, and Mansfield University.

The May 17 concert will feature the premiere of “Three Dances for Guitar Quartet” by Justin Jaramillo, a freshman composition major in the Eastman School of Music. The work was commissioned for the anniversary celebration and consists of three movements, Prelude, Panomara, and Jolt, that reflect the past and present inherent in anniversaries through the juxtaposition of baroque musical forms and harmonies with modern ones. Jaramillo was a student at ECMS, traveling weekly from his hometown of Utica, N.Y., to study piano, composition, theory, and music history at the school.