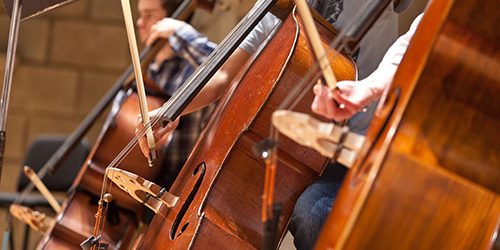 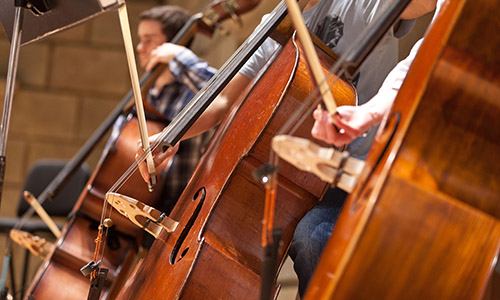 Hundreds of double bassists from some 30 countries will descend on Rochester in June, and audiences will be able to hear some of the greatest names in classical and jazz bass perform in Kodak Hall at Eastman Theatre.

The Eastman School of Music is hosting the International Society of Bassists from Sunday, June 2, through Saturday, June 8, for the organization’s biennial convention, an event that routinely draws more than 1,000 attendees.  The convention will be a homecoming for such alumni as Ron Carter, a Grammy winner and one of the most influential bassists in jazz; Brett Shurtliffe, Associate Principle Double Bassist with the Buffalo Philharmonic; and Yung-Chiao Wei, an acclaimed soloist and chamber and orchestral performer.

Carter, Shurtliffe, and Wei will kick off five nights of a double-bill series of classical and jazz bass concerts on Tuesday, June 4, at 8 p.m. in Kodak Hall.

The International Society holds a convention every other year that features events such as competitions for bass makers, composers, and performers; lectures; vendor exhibits; and recitals. Attendees, who range from young students to seasoned professionals, also can participate in master classes, workshops, and ensemble playing. More than 200 activities, from morning “Coffee Talks” to late-night “ISB After Hours” sessions, will be held across the Eastman School campus.

“It’s an honor to welcome the ISB for its biennial convention,” said Jeff Campbell, Associate Professor of Jazz Studies and Contemporary Media and one of the convention co-hosts. “There is a great sense of family within the world-wide bass community and I’m thrilled see and hear all these wonderful bassists in my own backyard.”

“It  is a thrill for me to not only have so many bassists come to the Eastman School and to Rochester, but to see so many of my former students have such prominent roles in performing at this prestigious event,” said James VanDemark, Professor of Double Bass and co-host of the Convention.

Sessions for all ages and skill levels

The first full day of the convention, Monday, June 3, features competitions in the categories of solo, jazz, and orchestral performance, with a separate category for bassists under 14 years of age.  Newly built double basses will be on exhibit as part of the three-day luthiers contest; the instruments will be tried out and judged on workmanship and tone, while the instrument makers will be demonstrating their craft.

A “young bassist camp” throughout the week gives musicians 17 and under the chance to play in both small and large ensembles as well as attend special sessions and master classes with some of the star performers, including Wooten, Gannett, Clayton, and Reid. The camp culminates in a concert with all the participants playing together on stage as one large double bass orchestra.

Double bassists from five continents will be coming into Rochester for the convention, from countries including Germany, England, Italy, Poland, France, China, Japan, Australia, Brazil, Argentina, Venezuela, Mexico, and from across the United States and Canada. There will be several contingents of young foreign students, including from Argentina and Venezuela.

“The ISB couldn’t be prouder to be bringing its 2013 Big Bass Bash to the fabled Eastman School of Music, and we are grateful to the school for the invitation and warm hospitality,” said Madeleine Crouch, General Manager, International Society of Bassists.  “Our convention, held every other year, is like an enormous family reunion, and we’re excited to welcome the music-loving community of Rochester to join in the fun. You don’t have to be a bassist to have a great time at an ISB convention, there’s no other musical experience quite like it on earth.”

The Eastman School of Music is ranked among the nation’s premier music schools, boasting Guggenheim Fellows and Grammy and ASCAP Award winners on its distinguished faculty. The school has been commended and recognized nationwide for giving its students an intensive professional education, entrepreneurial opportunities in their musical disciplines, and the experience of a broader liberal arts education within the University of Rochester. Eastman’s prominent alumni include opera singers Renée Fleming, Nicole Cabell, Anthony Dean Griffey, and the late William Warfield; jazz musicians Ron Carter, Steve Gadd, and Chuck Mangione; composer-conductor Maria Schneider; and composers Dominick Argento, Kevin Puts, Charles Strouse, Michael Torke, and Jeff Beal. The school presents more than 700 public concerts a year and hosts a variety of prestigious festivals and events.

The International Society of Bassists was founded by the world-renowned virtuoso Gary Karr in 1967. With nearly 3,000 members in over 40 countries, the ISB publishes a triannual magazine, Bass World, with an eclectic mix of articles about soloists, jazz and orchestral players, early music, pedagogy, international personalities and orchestras and reviews of new print music and recordings. News about upcoming ISB events and competitions and basses for sale is published in the biannual newsletter, The Bass Line. Every two years the ISB holds an international convention at a host university. Bassists of all ages and abilities come for a full week of workshops, master classes, recitals and lectures, and to shop in the exhibit hall. The ISB is a worldwide forum for double bassists to learn and share.

International Society of Bassists Concert: Diana Gannett performs new works; Chuck Israels, bassist with the Bill Evans Trio, pays tribute to a master of bebop with the “Oscar Pettiford and Beyond” Octet