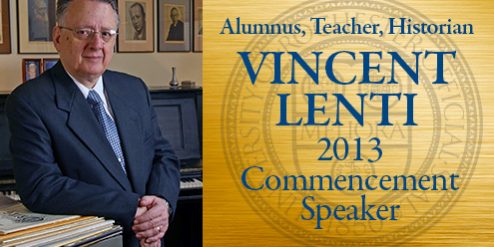 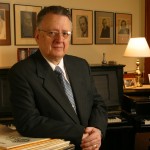 This year’s graduates of the University of Rochester’s Eastman School of Music will receive parting advice from alumnus, faculty member, and School historian Vincent Lenti, who will offer his perspective on Eastman’s past 60 years and its future. Lenti, who was recently feted for five decades of service to the School, will speak at the School’s 88th Commencement ceremony at 11:15 a.m. Sunday, May 19, in Kodak Hall at Eastman Theatre.

A pianist, Lenti received his bachelor’s degree in 1960 and his master’s degree in 1962 at Eastman, where he was a student of the noted Italian pianist and pedagogue Orazio Frugnoni. He was one of the last faculty members appointed by legendary Eastman director Howard Hanson and has been honored for his service by both the university and Eastman.

In addition to serving as Eastman School Historian, Lenti is Professor of Piano and Coordinator of Primary and Secondary Piano, and also supervises doctoral teaching assistants. He was director of Eastman’s Community Education Division, now known as the Eastman Community Music School, for 26 years.

In 2010, the University of Rochester awarded Lenti the Charles Force Hutchison and Marjorie Smith Hutchison Medal, the highest honor given to an alumnus/a in recognition of outstanding achievements and service to community, state, or nation. In 2002, he was the recipient of Eastman’s Eisenhart Award for Excellence in Teaching.

During his career, Lenti coordinated and lectured at Eastman School piano teacher workshops, served on the board of the New York State Music Teachers Association (NYSMTA), and lectured at conventions of the Music Teachers National Association.  In 1986, NYSMTA honored him with the 25th Anniversary Award for Outstanding Service. He has written dozens of articles on church music and liturgy that have appeared in such journals as The American Organist, Pastoral Music, The Hymn, Cross Accent, Studia Liturgica, Worship, and Sacred Music.

In the greater Rochester community, Lenti has served on the boards of St. Bernard’s Seminary, St. Bernard’s Institute, Young Audiences of Rochester, and the Rochester Philharmonic Youth Orchestra.

Lenti is writing a three-volume history of the Eastman School of Music. The first two volumes, For the Enrichment of Community Life and Serving a Great and Noble Art, were published in 2004 and 2009.

Lenti’s many perspectives on the Eastman School experience are enhanced by many family connections to the School.  His wife Christina and his daughters Elizabeth and Anna all earned bachelor’s degrees at Eastman; his brother Tony and sister-in-law Marianne each earned their bachelor’s, master’s, and doctoral degrees at the School – a grand total of 11 degrees in the family completed at Eastman.