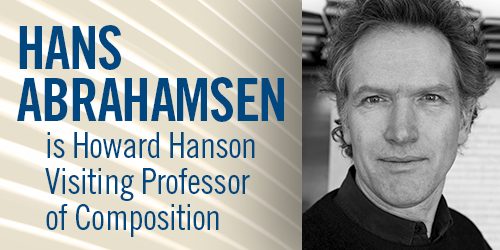 Hans Abrahamsen, a Danish composer whose early work reflected the “New Simplicity” reaction to avant-garde complexity, will be in residence at the Eastman School of Music in April as this year’s Howard Hanson Visiting Professor of Composition.

Abrahamsen’s work will be performed by Eastman’s Musica Nova at 8 p.m. Monday, April 8, in Kilbourn Hall, and by visiting guest artists JACK Quartet at 8 p.m. Wednesday, April 10, in Hatch Recital Hall. During his residency, Abrahamsen will attend rehearsals and the concerts, give a presentation on his string quartets, and conduct a composition symposium and master class.

A key figure in the Danish New Simplicity movement, Abrahamsen’s early work exhibited the minimalist style and the objectivity and clarity of expression that were characteristic of the movement. As his style developed, his compositions exhibited an almost romantic character and grew more personal, original, and distinctive.

Many of Abrahamsen’s pieces are short and small-scale, with light textures and lack of harsh dissonance. Other works exhibit a more complex and dramatic style.  His music has been described as imaginative, lyrical, lucid, clean, intelligent, spiritual, and magical. Among other honors, he has received the Carl Nielsen and Anne Marie Carl-Nielsens Hæderspris and the Wilhelm Hansen Prize.

The Howard Hanson Visiting Professorship in Composition is funded by Eastman’s Hanson Institute for American Music.