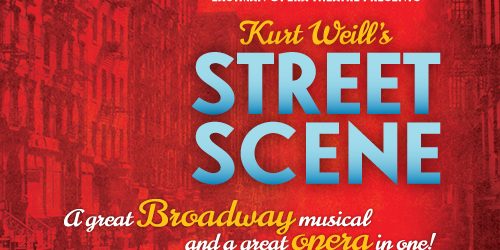 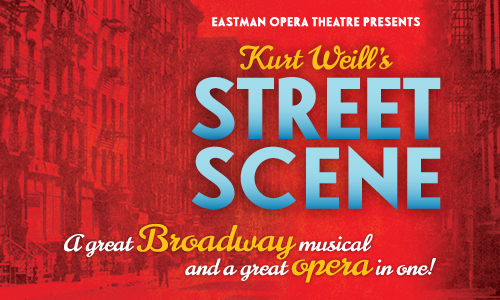 Kurt Weill’s Street Scene, which The New York Times called “the most important step towards significantly American opera” when it premiered in 1947, will be presented by Eastman Opera Theatre April 4 through 7.

Based on a Pulitzer Prize-winning play of the same name, Street Scene garnered Weill the first Tony Award for Best Original Score.  The story depicts the ordinary lives of a group of New York City tenement residents, following their problems, fights, desires, and frustrations over two sultry days. Weill employed a variety of musical elements from jazz, blues, big band, Italian opera and Wagnerian orchestral works to reflect the multi-ethnic inhabitants of the brownstone apartment building.

The composer further replaced the recitative style of dialogue used in opera with spoken dialogue. The dialogue is underscored by the orchestra, connecting the arias, ensembles, songs, duets, and dances. Street Scene, which Weill subtitled “An American Opera” but also called “My Broadway Opera,” synthesized traditional European opera and American musical theater.

Weill himself would say of the work, “Not until Street Scene did I achieve a real blending of drama and music, in which the singing continues naturally where the speaking stops and the spoken word as well as the dramatic action are embedded in overall musical structure.”

Street Scene is based on a play by Elmer Rice, who wrote the opera’s libretto with African American poet Langston Hughes. The story revolves around several characters, including Anna Maurant, a woman with a brutal drunk for a husband, who finds friendship and compassion with the milkman Sankey; daughter Rose, who longs to get away from home; and Sam Kaplan, a bookish law student. A Greek chorus of neighboring families gossips, eavesdrops, complains, and faces eviction, returning to their mundane daily lives even after tragedy strikes among them.

Street Scene will be presented in Kodak Hall at Eastman Theatre at 7:30 p.m. on Thursday, April 4; Friday, April 5; and Saturday, April 6; with a matinee at 2 p.m. on Sunday, April 7. Pre-performance lectures will be given one hour before the start of the Friday, Saturday, and Sunday performances in the Ray Wright Room (Room 120) in the Eastman School of Music.

Related Information: Kurt Weill is being celebrated locally over the course of a month, beginning with three broadcasts of Kurt Weill, American, on WXXI Classical 91.5 March 9, 16, and 23; Eastman Opera Theatre’s production of Street Scene; the annual Lotte Lenya Competition for singer-actors on April 13; and Nazareth College’s production of The Threepenny Opera April 12, 13, 14, 19, 20, and 21.