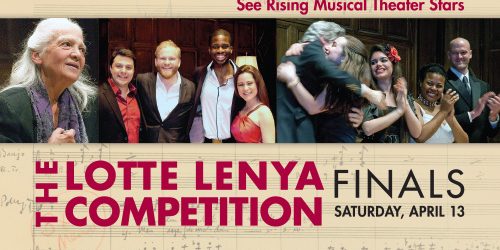 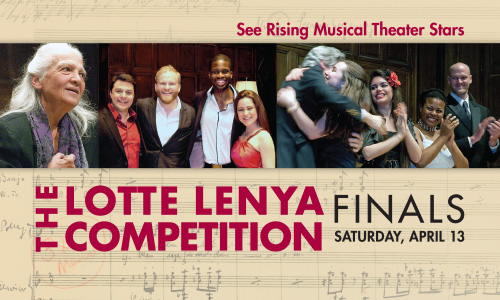 Twelve exceptionally talented young singer-actors, with previous stage experience ranging from roles on Broadway to the Metropolitan Opera House, will participate in the finals of the 2013 Lotte Lenya Competition on Saturday, April 13, at the Eastman School of Music.

Held annually by the Kurt Weill Foundation for Music and celebrating its 15th anniversary this year, the Lotte Lenya Competition is an international theater singing contest that recognizes talented young singer-actors, ages 19-32, who are dramatically and musically convincing in a wide range of repertoire, and emphasizes the acting of songs and arias within a dramatic context.

For the finals, the competitors will each perform a program of four selections between 11 a.m. and 3 p.m.: an aria from the opera or operetta repertoire; two songs from the American musical theater repertoire (one from the pre-1968 “Golden Age” and one from 1968 or later); and a theatrical selection by Kurt Weill.  At 8 p.m., the competition will culminate in a concert featuring all of the finalists, followed by the announcement of the winners. Both the daytime finals and evening concert are free and open to the public, and will take place in the Eastman School of Music’s Kilbourn Hall.

The Kurt Weill Foundation for Music, Inc. is dedicated to promoting understanding of the life and works of composer Kurt Weill (1900-1950) and preserving the legacies of Weill and his wife, actress-singer Lotte Lenya (1898-1981). The foundation has published a commemorative brochure for the 15th anniversary of the Lotte Lenya Competition, which can be found at http://www.kwf.org/media/llc15thannivprogram.pdf

Related Information: Kurt Weill is being celebrated locally over the course of a month, beginning with three broadcasts of Kurt Weill, American, on WXXI Classical 91.5 March 9, 16, and 23; Eastman Opera Theatre’s production of Street Scene April 4 through 7; the Lotte Lenya Competition; and Nazareth College’s production of The Threepenny Opera April 12, 13, 14, 19, 20, and 21.