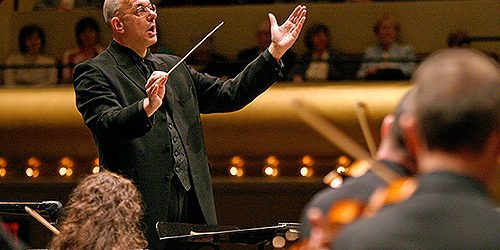 Bard College President Leon Botstein, a noted writer on music as well as an adventurous conductor, will give the Eastman School of Music’s 2013 Glenn Watkins Lecture on Wednesday, March 6, at 4:30 p.m. in Hatch Recital Hall, Eastman East Wing. He will speak on “The Future of Performance and Concert Life in Historical Perspective.”

Botstein has been President of Bard College since 1975, where he is also the Leon Levy Professor in the Arts and Humanities.  Under his leadership, the school has become a premier American educational institution and an international leader in liberal arts education with joint-degree programs in Russia, the West Bank of the Jordan River, Kazakhstan, and Myanmar.  An advocate for high school education reform and increased access for disadvantaged populations, Botstein is the author of the acclaimed book Jefferson’s Children: Education and the Promise of American Culture, which served as the model for Bard’s successful public high schools in New York, Newark, and New Orleans, and a school for underserved populations in California’s Central Valley.

Since 1992, Botstein has also been music director of the American Symphony Orchestra and a conductor of international renown. His pioneering thematic concert programming relates musical works to relevant extra-musical themes drawn from history, literature, politics, and the visual arts.  His rediscovery of neglected repertoire has led to the American premieres of works by Strauss, Hartmann, Dukas, Schmidt, and Chabrier and brought these significant works back to the concert and operatic canons. He has performed with major orchestras throughout Europe and Asia; his performances may be heard on a prestigious series of Grammy-nominated recordings made for the Telarc, Koch, and New World labels, among others.  He is also co-artistic director of the acclaimed Summerscape and Bard Music Festivals.  From 2003 to 2010 he was music director of the Jerusalem Symphony Orchestra, the state radio orchestra of Israel, where he now serves as conductor laureate.

Botstein publishes widely on the subjects of music, history, culture, and education.  He has written extensively on the historical and political contexts of major musical figures from Haydn, Mendelssohn, and Brahms to Schoenberg, Shostakovich, and Copland, and analyzed the relation of their accomplishments to other disciplines such as the visual arts and literature. He has also written on the impact of technology such as the piano and recording on music history.

Botstein’s annual essays for the Bard Music Festival, published by Princeton, are soon to be anthologized in a dedicated volume. For Norton he edited The Compleat Brahms (1999). His Judentum und Modernität: Essais zur Rolle der Juden in der Deutschen und Österreichischen Kultur, 1848–1938 (1991) was translated into Russian (2003). He is editor of The Musical Quarterly, a leading musicological journal, and co-editor of Jews and the City of Vienna, 1870–1938 (2004).  In 2011 he gave the esteemed Tanner lectures at University of California Berkeley on The History of Listening; these are forthcoming from Oxford University Press. An anthology of his essays in German will be available from Szolnay Verlag in Vienna in 2013.

Botstein, who received his master’s and Ph.D. degrees in history from Harvard, is the recipient of numerous honors, including the National Arts Club Gold Medal, the Centennial Medal of the Harvard Graduate School of the Arts and Sciences, the Austrian Cross of Honor for Science and Art, the Award for Distinguished Service to the Arts from the American Academy of Arts and Letters, and the Carnegie Academic Leadership Award. He was elected to the American Philosophical Society in 2010. He is also the 2012 recipient of both Longy Conservatory’s Leonard Bernstein Award for the Elevation of Music in Society and the University of Chicago’s Alumni Medal.

The Glenn Watkins Lecture was established in 2003 by Eastman School of Music alumnus Glenn Watkins to bring an exceptional lecturer in the field of music and related humanistic disciplines to speak at the School.  Watkins received his Ph.D. in musicology at the Eastman School of Music in 1953 and is considered one of the most distinguished musicologists of our time. His scholarly impact ranges from his pioneering studies of Renaissance composer Carlo Gesualdo to his influential books on musical modernism, its postmodern consequences, and music in World War I.  An Honorary Member of the American Musicological Society, Watkins is the Earl V. Moore Professor Emeritus of Music History and Musicology at the University of Michigan and the 2012 recipient of the University of Rochester’s Distinguished Scholar Award.